New Yorker Rachel Chu accompanies her longtime boyfriend, Nick, to his best friend’s wedding in Singapore. Rachel is unprepared to learn that Nick is not only extremely wealthy, but is also one of his country’s most sought-after bachelors.

92% on Rotten Tomatoes – “The result is hugely enjoyable, and hooray for Hollywood for making it happen.” – Wall Street Journal 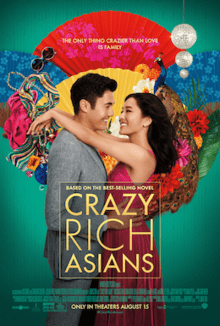