Where: Tofino Legion
When: February 9th
Time: 9pm – 1am

VIOLINISTEXTREMIST
If a line exists between classical and electronic, between ancient and new, synthetic and organic, Kytami has sliced them all using only a violin bow… but what more does she need?
Apparently nothing at all, as Kytami has already been dubbed a ‘music revolutionary’ by What’s Up Magazine USA, a ‘violinistextremist’ here at home, and has been summoned to bring her violin thunder to audiences as far reaching as Taiwan, Dubai and Berlin.

Through an alchemy of classical, fiddle styles fused with the heavy bass elements of DnB, Dubstep and Hip Hop, Kytami has managed to soar above not only the constraints of musical genre and labeling, but has forged a path so bold and unique that it won her awards such as “Live Act of The Year” at the 2013 Vancouver Island Music Awards and “Electronic/Dance Recording of the Year” at the 2013 Western Canadian Music Awards.
This girl doesn’t just play shows, she detonates dance floors. Kytami is internationally renowned for one thing: she rocks the fiddle like a woman possessed… and the audience dances to match.

From Germany to Hong Kong and Joshua Tree Festival to Shambhala, one thing is affirmed at Kytami concerts time and again: If you dare witness this violin diva take the stage, be prepared to wear through not only the soles of your dancing shoes, but perhaps the version of reality you brought to the door. 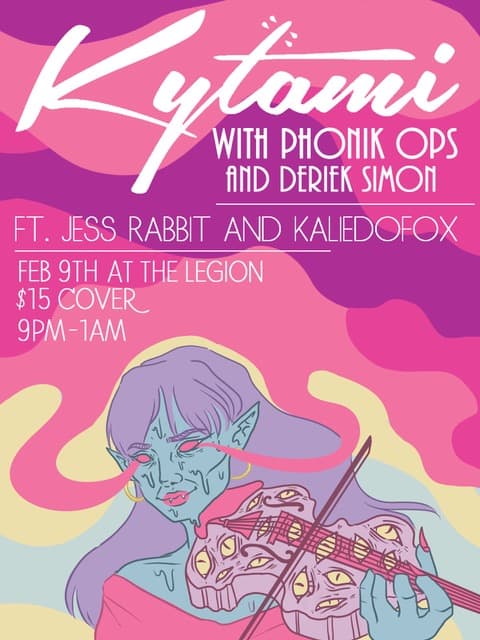