Shady Lady is a Canso flying boat, designed to take off and touch down on water. About 4,000 were built (620 in Canada), and these aircraft became one of most widely used, reliable and storied aircraft of WWII. One of them gained fame in the Tofino Ucluelet area after crashing on the north side of Radar Hill in the Pacific Rim National Park (luckily, all on board survived). At the war’s end, Shady Lady left Pat Bay and became one of the first aircraft to form the new Search and Rescue Group for the RCAF. She flew for many years in that role across Canada, from Newfoundland to Vancouver. Now living the life of a ‘fair-weather flyer’, she is spending her golden years proudly being flown and displayed as a living piece of Canadian and world history. You can read more on the Tofino Heritage Museum’s website here.

Shady Lady will be doing a fly over Chesterman Beach on its way to the Tofino Long Beach Airport where tours will be available from 2pm to 4pm on Friday, June 14th. 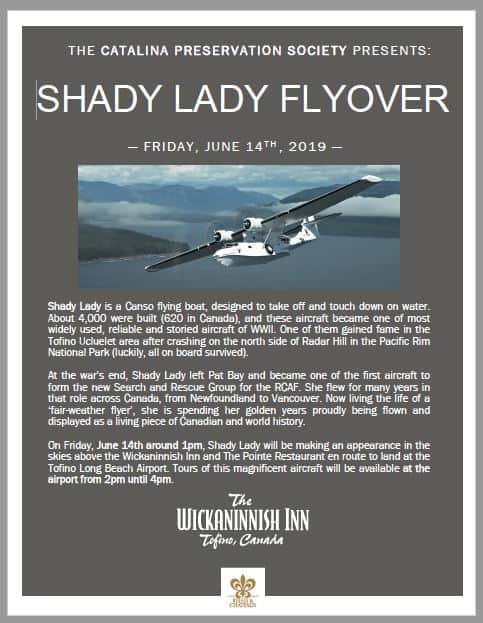