If you’re familar with Gibson’s Garden on Tofino’s Fourth Street, it’s a sight to behold.  We recently found this account from Ken Gibson himself of how his famed garden came to be:

At the 1985 Western Regional Conference at Seaside, Oregon, I believe it was Warren Berg who explained the difference between a gardener and a collector. To borrow his expression, “a gardener looks at his garden, determines what plant would look right, goes out and buys it. A collector buys a plant, finds a spot, and plants it.” By this rule, I am, unquestionably, a collector. My good fortune, however, is that my property is large enough to support my habit. (It has been known for people my age to develop worse habits.)
In 1956, my wife and I purchased an acre of land situated, at that time, on the inland edge of the developed part of the village of Tofino. (Tofino is a snug little fishing village on the west coast of Vancouver Island.) While playing cowboys as a young boy, I had discovered that this particular piece of land was actually a miniature mountain with a spectacular view of the harbour. It didn’t seem to matter that the hill, covered with virgin scrub forest, was at least 400′ from the main drag and on the other side of a swamp. I had already decided the view would be worth the price of two hundred and fifty dollars, plus all the work needed to clear the property.
Hard as he tried, my father, who was a very practical man, was unable to convince me to develop an easier piece of Tofino. Since the French language had driven me out of high school four years earlier, I had, instead, a few year’s experience in construction, logging and blasting behind me. By late 1956, I had acquired a used 440 McCullough chain saw from the logging contractor for whom I worked and, in the short days of winter, took up the challenge of capturing the hill. This early one-man saw weighed about 85 lbs., and was one of the first in private use in this area.
After establishing boundary lines, it was necessary to start draining the four feet of entrapped water on what is now known as Fourth Street. I planted a row of ditching dynamite sticks 14″ apart the length of the swamp. How the mud and grass sods flew – 150′ into the air, making the surrounding trees look like a chocolate-covered wonderland. It took several rains, I might add, to wash it off.

The following year, a D-7 mud cat bulldozed a right-of-way to the base of the hill, I had already fallen the trees and bucked the old cedar windfalls to help expedite the “cat’s” job. Fortunately, the swamp had hard-pan below the mud which allowed the machine a solid footing on which to work. The mud flowed like soup in front of the blade, refusing to be piled up, so another year had to pass before work could continue on the access road.
In the meantime, I cleared the hill top of underbrush and trees, and burned the burnable. One hemlock was fit to remain on the knoll; all the others were cat-faced cedar and poorly-formed hemlock, most of which were growing on windfall cedars – typical of our moss-covered, over-mature west coast rain forest. Many of the trees were two feet in diameter, others four feet, and were locked into rock crevices. Because of this, blasting the stumps was very difficult, and since the bulldozer with a winch could not tolerate the steepness of the hill, I decided to clear the hill by “high-lead” logging.
In exchange for back wages due me from a defunct sawmill, I acquired a donkey (two drum winch) mounted on a 24′ wooden sled. I winched it through the draining swamp to the foot of the hill with mud flowing over the sled like waves over a ship’s bow. I then hung the “bull block” sixty feet up in an old cedar snag, creating a spar tree. A one-man logging show was then ready to commence.
After work during the week and on weekends I was, then, married to land-clearing. Often I would get to the back end to hook a stump and discover the cable choker to be a few feet short of its mark, or that a stump would not let go. The donkey had a gear driven mainline drum so something had to give. When I felt the sled lift off the ground, I would hit the switch to stop the motor. I would, then, climb back up the hill to chop out the roots. With a ⅞” mainline as tight as a fiddle string, the stump would suddenly fly free taking most of the soil in its entangled root system to leave the rock bare. What soil that was left was soon either washed away with our annual 140″ rainfall, or blown off by the summer’s westerly winds.  Read more. 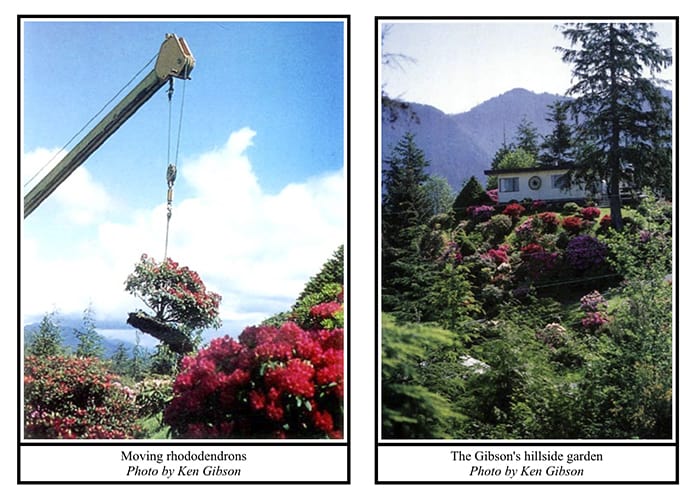