Tucked over an expansive mountain pass on the rugged coast of Vancouver Island, BC – lies a small surf and fishing town called Tofino. The journey here for many is a magical one, and for West Coast surfers, it is travelled with anticipation and unknown mystery. Winding through the mountains, up to pristine crystal clear lakes, and down through the natural old growth forests – the smell of ocean air and remote nature grows with every bend in the road.

A few kilometers before entering the small town of Tofino, tucked a stone’s throw off the single lane highway, lies Cox Bay – a magical and mystic beach oasis where human civilization has introduced itself to the majestic ruggedness of mother nature.

There once was a man who became unstuck in the world… he took the wind for a map, he took the sky for a clock, and he set off with no destination. He was never lost…

Cox Bay is more than a beach, she has a vibrant and ever changing personality. Depending on the time of year, where the sun sets and rises, and how the natural elements decide to show up, you will see her in a different mood. The beach comes to life with a variety of emotions playing off of the tone that is set by mother nature. We as humans have played a role in molding the personality of this beautiful beach as well – an odd bi-polar feeling can be sensed as you scan the beach from one side to the other. This is due to the fact that access to ‘Cox’ is only available on the north side, which has in turn been significantly developed. The once natural land that was between the northern rocky point and the furthest beach trail is now full of resorts and commercial developments – their concrete toes cozying right up to the sand and natural elements.

Foreign spectators on the sideline.

Because this is where we have chosen to leave our footprint, the north portion of the beach is always busier – both on land, and in the water. This is where visitors and beach go-ers set up camp for the day, as well as typically where surfers make their way into the dark frigid waters.

As you look out towards the south side of Cox, it is a different story altogether. The land, still privately owned, has gone untouched and looks as if you are in a rainforest oasis. The trees tell the tale of an ongoing dance between the elements of earth and sea. They lean back inland as if taking shelter, a result of thousands of years of dark storms and howling winds served up by the sea. 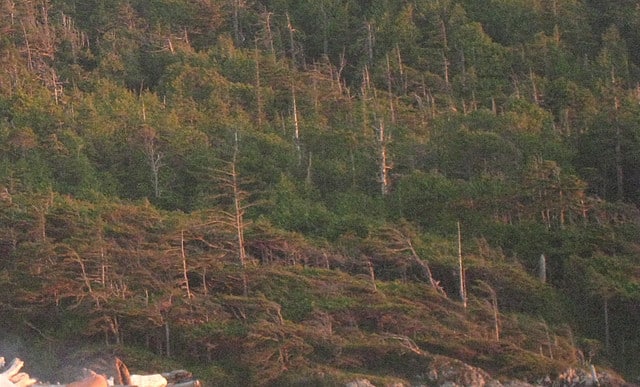 The beach careens on for several hundred hards in a bay-like semicircle, eventually running into a rocky cliff on the south end. The jagged cliff drives vertically up but is quickly taken over by the untouched old growth forest – the wise trees overlooking the beach and ocean. They are the keepers of the past in this place. The rocky point heads straight out to sea for half a kilometer, meeting the ocean head on and diving deep into the abyss.

There once was a man who became unstuck in the world…with a Poloroid camera he made pictures of all the people he met, and then he gave all the pictures away. He would never forget their faces. Each person he met became a little less stuck themselves. He traveled only with himself and he was never alone.

This is the same in the water as it is on land – the crowd of surfers naturally forms on the north side of the bay where the beach paths and big resorts dominate the landline. There have been many days that I have paddled out in front of the crowds and the resorts on the north side, seeing that the waves were much better in this small corner. I would blend in with the numerous surfers bobbing up and down, just a number in line waiting for my wave.

Of course time and time again I noticed myself drifting, as if being pulled by a greater energy and purpose away from the crowds and into the middle of the bay.. Searching for an empty peak and feeling more at home as the chimney smoke from the resorts gets smaller and smaller. I continue to move south until I start to notice the finer details up on the southern cliff face – the beautiful transition between jagged cliff and old-growth moss forest bed, a few hikers working their way up to a vantage point, the waves that violently break against the rugged cliff face, and the rocks submerged under water. 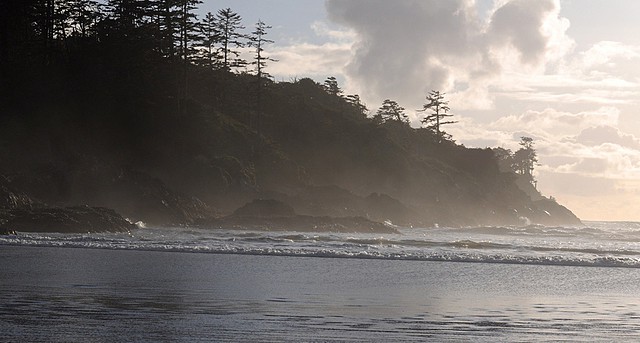 The group of 20 surfers I was just mintes ago sitting with now feels like miles away. I am sitting alone, bobbing up and down, far from the hustle and bustle of the resort and civilization it represents.

The symphony of nature has grown more profound – I pause and acknowledge the beautiful song we so often miss.

I notice myself detaching from the world – my mind begins to drift and sway, dancing in an effortless harmony to the swells in the ocean that are passing underneath me. I begin to notice things that were invisible only moments ago – the mist that creeps along the forest bed up on the rocky point – the trees that seem frozen in time, bent awkwardly inland as if retreating from years of battle, the sound of off-shore spray as it feathers back down to the ocean.

There once was a man who became unstuck in the world… and he traveled around like a leaf in the wind until he reached the place where he started out. His car, his job, his phone, his shoes-everything was right where he left it. Nothing had changed, and yet he felt excited to have arrived here- as if this were the place he’d been going all along…

I can feel the water running between my hands, I can see the ripples of sand on the bottom of the ocean floor. A seal notices and comes by to welcome me to his sanctuary. Birds sing, play, and fly by overhead…

For at least this one moment, I am unstuck in the world.