Everything from seaplanes to yachts and grey whales drift past Tofino on Clayoquot Sound. Picture: Craig Tansley. Source: Supplied

“YOU picked a great time to visit, we’ve got a heatwave coming,” the smiling receptionist says, thinking this is something I want to hear.

I can’t share her excitement. I want to tell her that to an Australian, she’s conjuring images of bushfires and sweltering afternoons indoors by an airconditioner.

“What exactly constitutes a heatwave in Tofino?” I ask.

“When it’s over 20 degrees for a few days in a row. The water’s real warm right now too,” she says.

Minutes after I’ve checked into a huge room looking across one of Canada’s best surf breaks, I’m running across a strip of sand and paddling into a deserted line-up dressed in a thick neoprene wetsuit with a hood on my head and bootees on my feet.

An inquisitive sea lion pops its head out of the ocean only metres away. It seems harmless enough and lingers close by while I wait for the best waves. A local surfer tells me he once saw a cougar on the beach here.

If this turns you off visiting, then be assured, Tofino is the prettiest beach town on Earth.

I grew up in Byron Bay, considered by many the world’s ultimate surf village, but Tofino has it licked.

There’s a magic quality that you’ll sense on entry and miss when you leave.

In a national park that until a few decades ago was connected to the outside world only by a gravel road that was barely passable in winter, Tofino is the gold at the end of the rainbow for travellers venturing to Vancouver Island’s west coast.

Because of its relative isolation – it is as far west as Canada will take you – progress hasn’t tarnished it. A close-knit group of alternatively minded locals see to that. Its surf beaches on the Pacific Ocean deliver world-renowned monster swells each winter and safer waves in summer, but it’s what’s on Tofino’s other side – the UNESCO Biosphere Reserve protected Clayoquot Sound – that makes this town a true beauty queen.

In lingering summer twilights, families picnic in public parks off the main street overlooking the prettiest stretch of water in North America.

Yachts and fishing boats motor past while seaplanes land right on the mirrored water of the sound. Behind it all, towering snow-capped mountains disappear into a hazy blue horizon.

It’s not unusual to see grey whales and porpoises – even the occasional orca – venture past, while beside the town’s only real bar, fishermen gut their catch as bald eagles hover overhead. Black bears, elk, wolves and cougars live just across the water in ancient forests where 1200-year-old trees stand in one of the few strips on Vancouver Island to avoid the timbercutters’ saws after one of the biggest protests in Canadian history in the 1990s.

I surf each day here, often in the twilight that fades to dark about 10.30pm. There are quality breaks up and down the rugged coastline, with few surfers to share the spoils.

But surfing is just a small part of Tofino’s attraction. The endless possibilities of Clayoquot Sound make this town unique.

It’s possible to take a cheap seaplane ride from a jetty just a few metres from the main street. It heads out low across the sound to the Pacific with its pods of grey whales before landing beside a rainforest.

The pilot waits while I walk to natural hot springs in the rocks by the sea. From my seat in the warm waters, I watch whales breach. 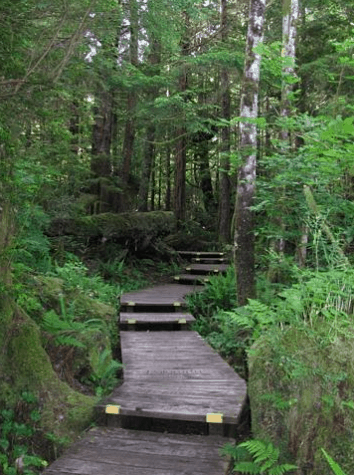 The following afternoon I take a boat across the bay to watch black bears in their native habitat. There are plenty around Tofino.

“They’re almost like gulls there’s so many of them,” the tour operator says.

Another day I take a kayak along the sound where sea otters, sea lions and harbour seals surface close by, to tiny Meares Island where I walk in a forest of ancient giant cedars.

There are many attractions in Tofino but it’s the inhabitants who impress me most.

Though it’s famous these days, there’s still an innocence that’s lacking in other surf towns which are often ruled by locals desperate to maintain the status quo.

People still call each other dude. The radio announcer tells me I’m “surfing the radio waves with Long Beach Radio” and surfers yell at me. It’s not to scare me off but to invite me to share their waves.

A guitarist playing covers at the bar on a cloudless Sunday afternoon tells us we don’t have to applaud. He’s already happy because he “got some good waves today and my dog and me walked on the beach”.

But it’s something a surfing veteran tells me (it doesn’t take long to feel like a local) that stays with me: “I call this place Never Never Land. Maybe it’s the water, I don’t know, but everyone around here carries on like they’re still 18”.

The writer was a guest of Destination British Columbia and the Canadian Tourism Commission. 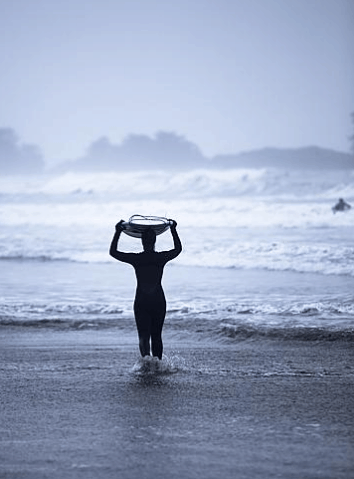 A surfer heads into the chilly waters at Torfino. Source:Getty Images

Air Canada flies direct to Vancouver from Sydney daily, with connections from other capitals or ph 1300 655 767. Hire a car in Vancouver (nationalcar.ca) and take a ferry to Vancouver Island (bcferries.com).

Stay on one of Tofino’s best surf beaches at the luxurious Long Beach Lodge Resort which has its own Surf Club Adventure Centre to hire surfboards, wetsuits and lessons.

Take a seaplane to Hot Springs Cove with Atleo River Air Service and a bear-watching cruise with the Whale Centre. Go kayaking up Clayoquot Sound with Tofino Sea Kayaking.