We’ve come to Tofino, to the end of the road on Vancouver Island’s wild west coast, to embrace the beach and all that it entails.

The beach is the backdrop to everything here. The big waves that curl and crash over miles of soft sand create a playground for surfers, a bounty for beachcombers and a constant white noise, as mesmerizing as the veil of fog that often rolls in behind.

We’re content to stroll the packed white sand, and simply sit and stare at the truly majestic magnitude of it all. The cellphone coverage is spotty and the WiFi even worse, which makes these beaches the perfect place to unplug, unwind and just sit back and smell the seaweed. Or taste it. 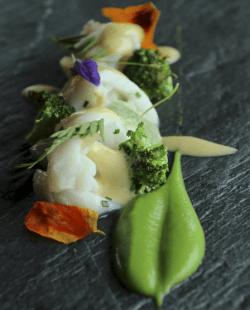 Yes, that’s on the agenda, too, for these pristine coastal waters are home to 20 kelp species, the highest concentration and diversity in the world. Healthy sea vegetables are the latest hot kitchen-commodities, and Tofino chefs have a bounty of choices, from the kelp and sea lettuce waving in the shallows, to the salty sea asparagus and dune spinach sprouting on the shore.

“Its just a cool idea to go for a walk along the beach and see what you can find to eat,” says chef David Sider, who heads the team at the Pointe Restaurant at the Wickaninnish Inn and draws inspiration for his creative cooking from the beach pantry.

Sider arrived at the inn a year ago from Langdon Hall, another famous Relais & Chateaux property, and his multicourse tasting menu includes foraged sea plants on every plate, creations as stunning as the panoramic views of Chesterman Beach from every table.

We begin with a fluffy mound of reindeer moss, crisply fried and topped with shavings of salt-cured egg yolk, an ephemeral mouthful of toast and egg. Then there’s a cube of raw albacore tuna, dusted in charred leek, to dip in a swirl of sweet cream and electric-green dill oil, chased by a tender pink tendril of local octopus and a smoked Outlandish mussel, perched on a sliver of new potato under a flurry of spruce oil snow.

“We have a number of different foragers who visit the back door,” Sider says. “But we can pick sea lettuce, beach peas, sea arugula and dune spinach right here.” 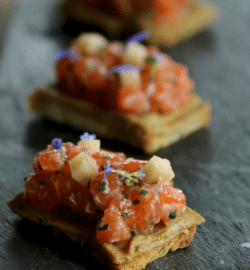 We head out to the white shell beach beyond the hotel kitchen to search, and Sider plucks a handful of edibles, including the ruffled sea lettuce he’ll lightly poach and serve in a foamy chicken and truffle emulsion, and the beach pea greens that will top a plate of tender halibut cheeks.

An estimated 650,000 tonnes of wild kelp grows along the province’s coast, with bull kelp being the fastest growing seaweed on earth, growing from a tiny spore to a 61-metre plant in a single summer.

“We receive it dry, in long dehydrated strips, then it’s blanched and julienned,” says sous chef Martin Dean about the crinkly kelp that stars in this creative, Asian-inspired combination. 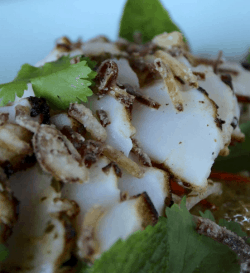 Fishing and foraging on the rugged west coast is at the heart of the Wolf in the Fog menu: Shareable plates include thick slices of tender Humboldt squid (this rare behemoth can weigh 100 pounds) and the Spanish Picnic platter of cod, octopus and mussels with romesco sauce.

Even the casual observer will find all manner of interesting sea plants on a stroll along Tofino’s expansive beaches. But if you’re really curious about seaweed, the local Raincoast Education Society offers free Raincoast Walks to explore the intertidal zone at low tide, and a three-day Seaweeds of the West Coast field course.

Long Beach Lodge chef Ian Riddick finds chanterelles and other tasty treats on his regular beach and rainforest walks. Riddick says he wants his food to be part of “the adventure” guests experience, so he smokes his own salmon, makes his own “Cox Bay Salt,” and pickles bull kelp tubes with ginger and rice vinegar to create a crisp relish for the restaurant and new Sand Bar beachside café.

“We get mushrooms and nettles and recently our forager brought in 25 pounds of sea asparagus,” says Riddick who arrived in Tofino last year, after stints in Whistler and Okanagan resorts.

“I’ve always been a forager, but I can actually find something to eat 12 months of the year here. That’s unusual for Canada.”

The beaches of Vancouver Island’s wild west coast are renowned for their big surf and changeable weather. The most famous is legendary Long Beach, in Pacific Rim National Park, a 16-kilometre swath of sand backstopped by windswept, old-growth conifers and tangled driftwood. Walk all day or climb Incinerator Rock for a fantastic view. The others are:

It’s a 2.7-km stretch of white sand. The Wickaninnish Inn is at the north end of the beach, and there are posh homes and B&Bs along the beach, with its tide pools and sandspit to Frank Island, walkable at low tide.

The one closest to town, there are campgrounds along a beach that’s sheltered by tidal rocks, with calm waters suited to swimming and paddle-boarding.

A section of Long Beach, this stretch includes the Kwisitis Visitor Centre, massive sand dunes and piles of driftwood brought in on powerful ocean waves.

The easy-walking trail that leads to this beach starts less than a kilometre from the post office in downtown Tofino. Follow the boardwalk and stairs down to the beach for white sand and spectacular sunsets.