Home News + Blogs Tofino, I Can’t Get You Out of My Head 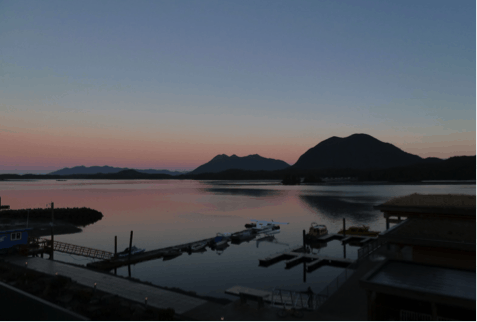 Things right now in the Caudill household are … stressed. Between dealing with Irish bureaucracy and a law firm run by evil, mischief making leprechauns, health issues that couldn’t come at a worse time, a car dealership that couldn’t order the right part if their lives depended on it, and a whole host of other small things that in and of themselves aren’t major but when you pile them all together on top of everything else become a giant headache … well, I’m ready to escape to my happy place and curl up in the fetal position until the stars somehow align and everything starts running smoothly again.
At any one moment in my life, that happy place could be just about anywhere. We’ve been to a lot of places together over the past 20 years and some of them we’ve gone back to over and over again. Hawaii is one such place, and I love it truly, madly, deeply … but … of everywhere we’ve ever been it’s Tofino that from the very first moment we arrived managed to lodge itself deep within my heart and then refused to budge. There’s just something about this small town at the literal end of the road (the Trans-Canada Highway, to be specific) that I can’t shake. And I don’t ever want to.
The first time we visited Tofino was in 2010 and I was going through a particularly hard time at work. For my birthday that year we scheduled a 10-day trip to British Columbia that included stops in Vancouver, Victoria, and Tofino. We enjoyed our trip so much, but driving up to Middle Beach Lodge that first day did something to me. We stepped out of the car after what had been a rather long day and I was immediately at peace. I don’t know if it was the smell of the spruce and cedar that surrounded us, mingled with the tang of the salty sea breeze, but it was intoxicating. Within ten minutes, I swear I was already plotting how we could go back the following year.
I think one of the things I love about Tofino is how hard it is to get there. You have to really want to go. We’ve done the ferry + driving thing, as well as the major airport + tiny airport route, and each has its own charms. Our last two trips have been during winter when the seas are high and the highway that cuts across Vancouver Island can be closed with snow, so we’ve flown from Vancouver International on a tiny 8-seater to Long Beach Airport, a one room terminal just outside Pacific Rim National Park. And then once you do manage to get there – usually after an all-day trek – it’s like you’ve entered another world. Things are slower and that’s okay because you don’t want the time to fly by. You want your days to last longer so you can get in one more hike, or walk along the beach, or meal in town, and then you hope that long nights spent sitting by the fire extend out in front of you with no end in sight.

One of the best vacations of our entire life was the two weeks we spent there over Christmas 2012. We rented a cabin on Chesterman Beach and that first week we worked remotely. That first day though? Well, that was something special. This was the first time we’d visited in winter and we had no idea what to expect. We arrived to a king tide, the ocean water going practically up to the property. As the temperatures dropped, there were whispers of snow but we didn’t pay it any heed. It doesn’t snow at the ocean! The next morning, around 4 a.m., I was woken to the sound of intermitted and extremely loud banging. In the pre-dawn darkness I couldn’t identify where it was coming from and since I have an overactive imagination, I immediately assumed we were under attack. BOOM! the noise went again. Being the world’s biggest chicken I did the best thing I knew – woke up Alan and asked him to investigate. (In a horror movie I would never be the stupid girl who walks outside to find out where that chainsaw noise is coming from.) That’s what he told me – it had snowed overnight and the sounds I heard was the heavy snow falling from the boughs of the evergreens soaring above onto our pitched roof, and then sliding down before plopping onto the deck. When we finally woke up and ventured outside, it looked like a winter wonderland. My heart swelled three sizes that morning.

Our lunch hours were spent walking the beach, and then when we wrapped up for the day we’d wander the beach again. We had several really fantastic meals in town, and spent Christmas Day cooking our own prime rib with brussel sprouts and potatoes au gratin, served up with a Cowichan Valley red wine. I don’t know that I’ve ever had a better meal for Christmas, even though it was by no means perfect. That second week we were completely untethered from work and it was marvelous. I lost count of the number of beach walks we took, the number of hours we spent watching How I Met Your Mother in front of the fireplace, streaming (poorly) over Netflix and Tofino’s bad wireless, or running naked in the freezing cold from the hot tub on the deck back into the house before anyone could see us. On the night that some crazy kook had predicted the end of the world, the local radio station was running thematic songs to celebrate the supposed countdown, and I jokingly exchanged text messages with the DJ throughout the evening, throwing in our recommendations – REM’s It’s The End of the World As We Know It, Blue Oyster Cult’s Don’t Fear the Reaper, The Doors’ The End, etc – and when he played them, we cheered and danced around the little dining room. I painted (badly) and Alan went surfing (adequately). I never wanted to leave and by the time we flew out I was plotting a way we could someday own our own place there.
We loved being in Tofino in winter so darn much! I tried to convince Alan to make it our annual Christmas destination, but he just mumbled something about his mom and needing to spend Christmas with her. Not to be deterred, I booked us a trip back leaving out of SFO bright and early on December 26, 2013. Word to the wise: the day after Christmas in Canada isn’t just meant for running out to Target and stocking up on post-Christmas loot. No, they close that place down. We flew in on Orca Airways to a pretty empty airport with no agent at the rental car counter to greet us. We called in a taxi, which is a relatively loose term in a town the size of Tofino, and waited by ourselves while he came to pick us up and take us into town. Before hitting up our accommodations though, we stopped in at Tofino Brewing Company to stock up on beer since we didn’t think the stores would be open. That year, rather than staying on one of the beaches, we rented a beautiful new condo smack dab in the middle of all the action with a direct view over the working harbor (that first picture above is the scene from our deck). The next day we called the taxi to pick us up and take us back to the airport where we could finally pick up our rental car. Not exactly ideal, but looking back it’s one of those stories that I feel like could only happen in a place like Tofino. “Remember that time we flew in and couldn’t get our car?”

That stay was a quick one by comparison to the year before. We both worked, and didn’t spend as much time walking the beach, but it was still a spectacular getaway. We took a day trip up to the Hot Cove Springs where immediately upon stepping off the boat my feet slipped on the slick wood pier and I landed smack dab on my tail bone – an injury that to this day plagues me day and night. We also had the wonderful luck of seeing not one but TWO fireworks displays on Cox and Mackenzie Beaches on New Year’s Eve, something I’ll never forget. Oh, and that freezing cold walk on Mackenzie Beach the next day when we were the only two souls out there brave enough to face the fierce winds and piercing temperatures. All alone on the water except for the eagles who soared above. During that trip, I talked incessantly about us buying a vacation property up there, and had a realtor been around, I think I might have even been able to drag Alan to look at one or two places.
It’s been nearly two years since we’ve been back, and I feel like every year that passes without a trip to Tofino is a year that my heart is less rich, my soul less calmed. They say there’s a special place in the world for all of us, and if Tofino isn’t mine, I don’t know what is.

Given the many and ongoing delays that we’re experiencing with our visa for Ireland, we are just about ready for a real getaway to our happy place and I’m seriously trying to figure out a way we can fit in one last, quick trip to the place I love so, so much. It’ll be tight, and not at all convenient, but sometimes when you need to get away, there’s only one place that will do.
I mean, with a place that looks like this, why would you want to go anywhere else?