Home News + Blogs Getting High on a Helicopter Tour in Tofino 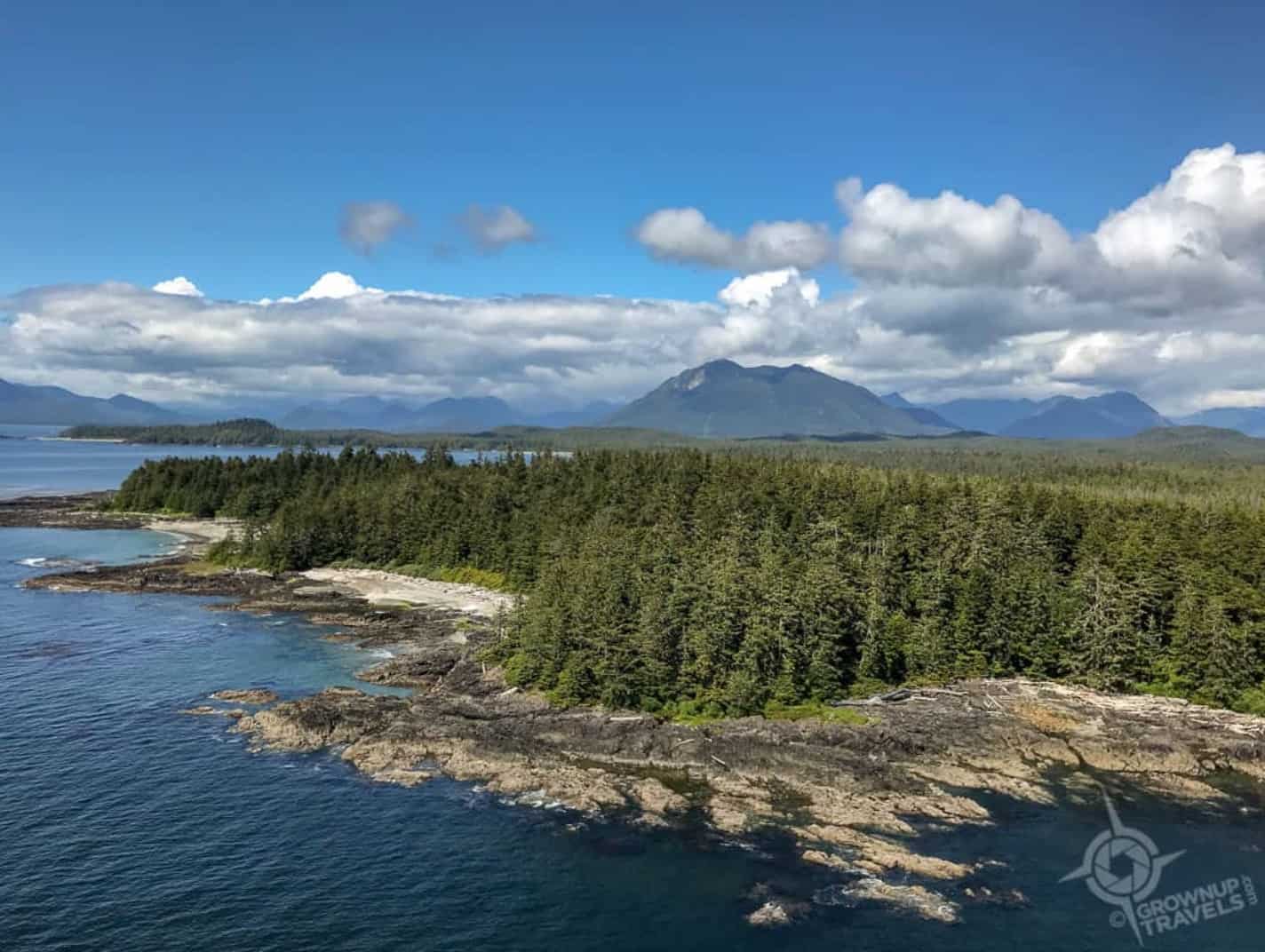 There is more than one way to get high in Tofino, Canada’s version of a California surf town, but the one that draws people to this town by the thousands probably isn’t the one that immediately comes to mind. No, the real high that people seek in Tofino is a natural one that comes from the plentiful wildlife, stunning landscapes and blue Pacific waters that surround this beachside community. And one of the best ways to take it all in is from the air, with a flightseeing helicopter tour in Tofino operated by Atleo Air.

Not Your Typical Tourist Flight 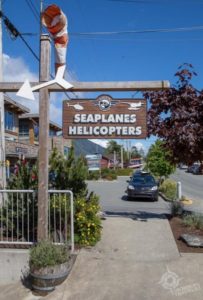 In a community as small as Tofino, and with rugged wilderness surrounding it, Atleo Air is much more than a flightseeing company. Their helicopters and float planes are just as likely to be asked to help with a medical evacuation situation or to do a supply run to a remote wilderness camp as they are to take visitors up to see Clayoquot Sound. What that means is that the company is flexible and open to customizing flights to accommodate their passengers’ needs or desires. That being said, they do offer a range of tours, including one that Henk and I took which was spectacular: the Offshore Island Helicopter Tour.

Tofino’s location adjacent to Pacific Rim National Park and Clayoquot Sound means any tour from the air is sure to provide stunning views: endless Pacific Coast beaches, forested mountains and pristine wilderness, and dozens of small islands which can only be seen – or reached by air or water. So it was an absolute thrill when Henk and I learned that this Offshore Tour didn’t just give us a birds-eye view of these islands, it offered the chance to set down on one of them and explore them, too.

After arriving at the Atleo hangar at Tofino Airport and being briefed on safety procedures for the helicopter, our pilot, Antony, asked us where we would like to go. Not knowing the area’s geography ourselves, Henk and I and the other 2 passengers suggested it be ‘pilot’s choice’ since Antony was the expert. All we need to do was climb on board and see where he would take us. 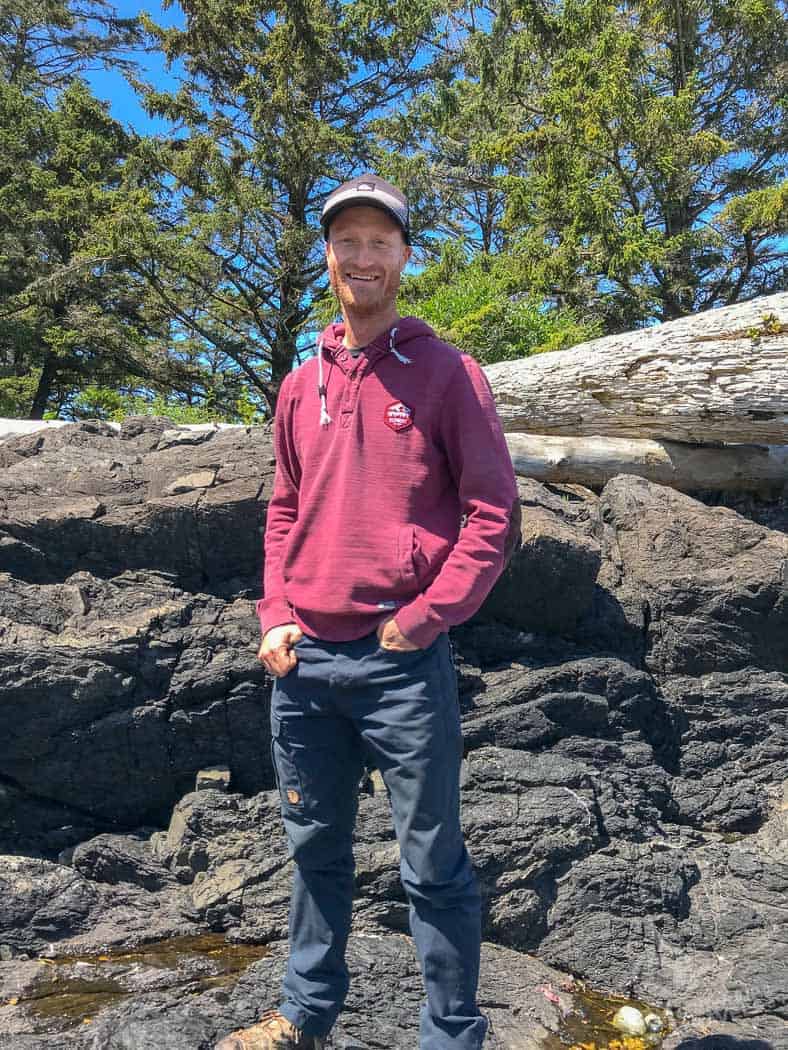 I’m always amazed at how anti-climactic the takeoff of a helicopter is. Unlike aircraft that give you the build-up with roaring engines and ground acceleration to signal launch, our chopper lifted off with little preamble and suddenly we were in the air, watching the landscape drop off below us. 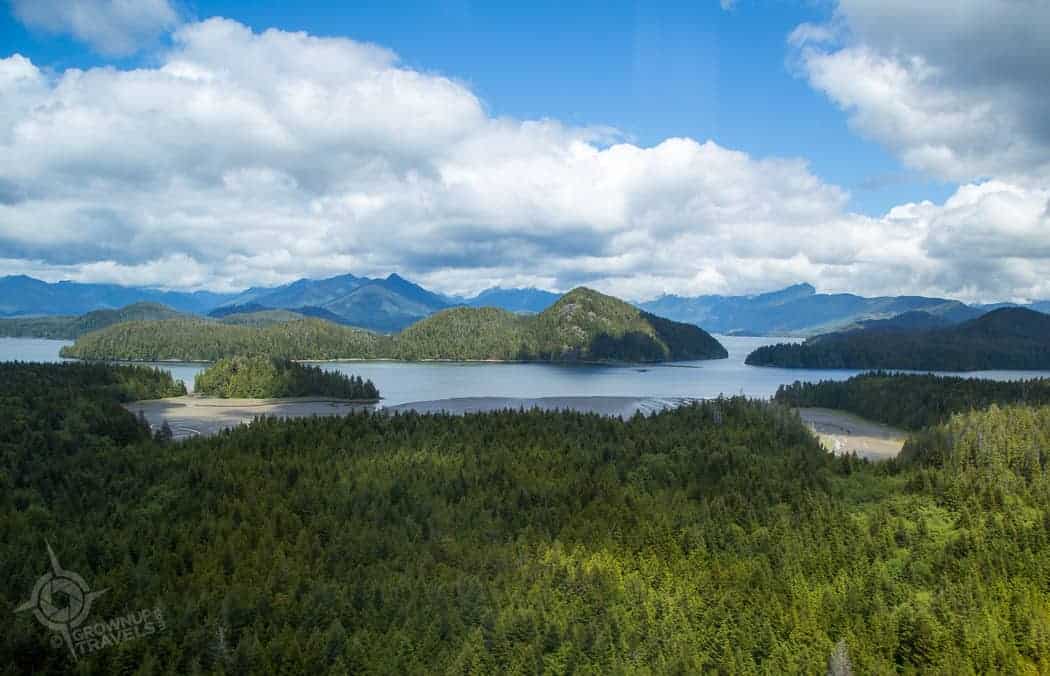 An easy take off immediately took us above the trees

First destination was the surrounding mountains that encircle Clayoquot sound, green mounds covered in old growth forests that from our perspective looked like normal trees, not the 200-foot giants that some of them are.

Pulling away from the hills that rose around us, we got our first panoramic view of the coastal landscape, a UNESCO Biosphere Reserve with countless islands dotting the blue waters. 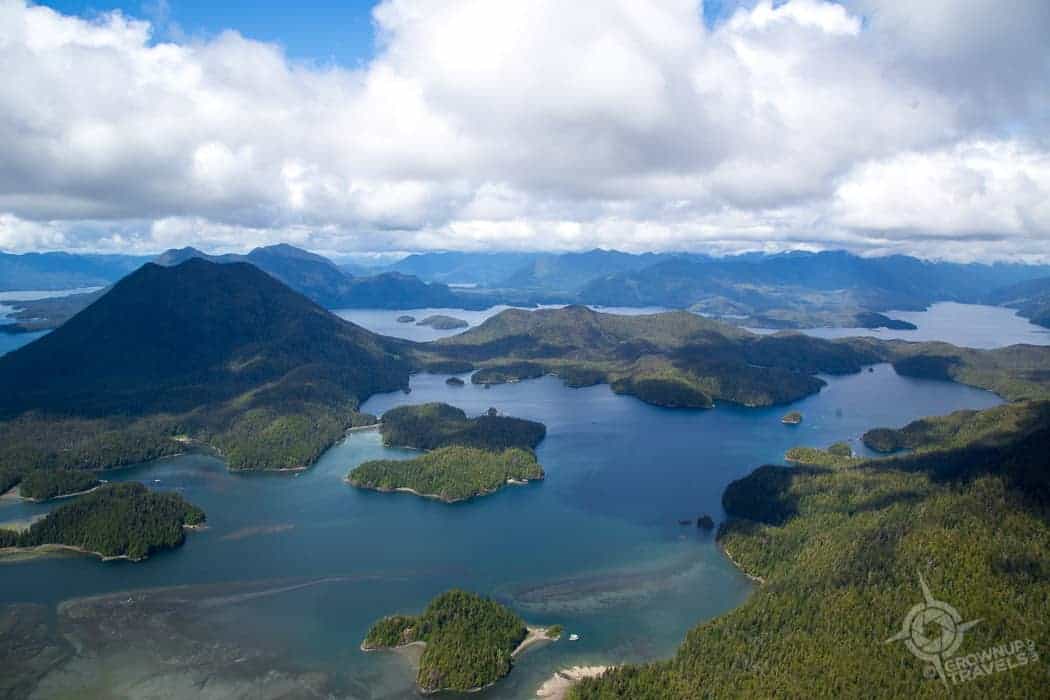 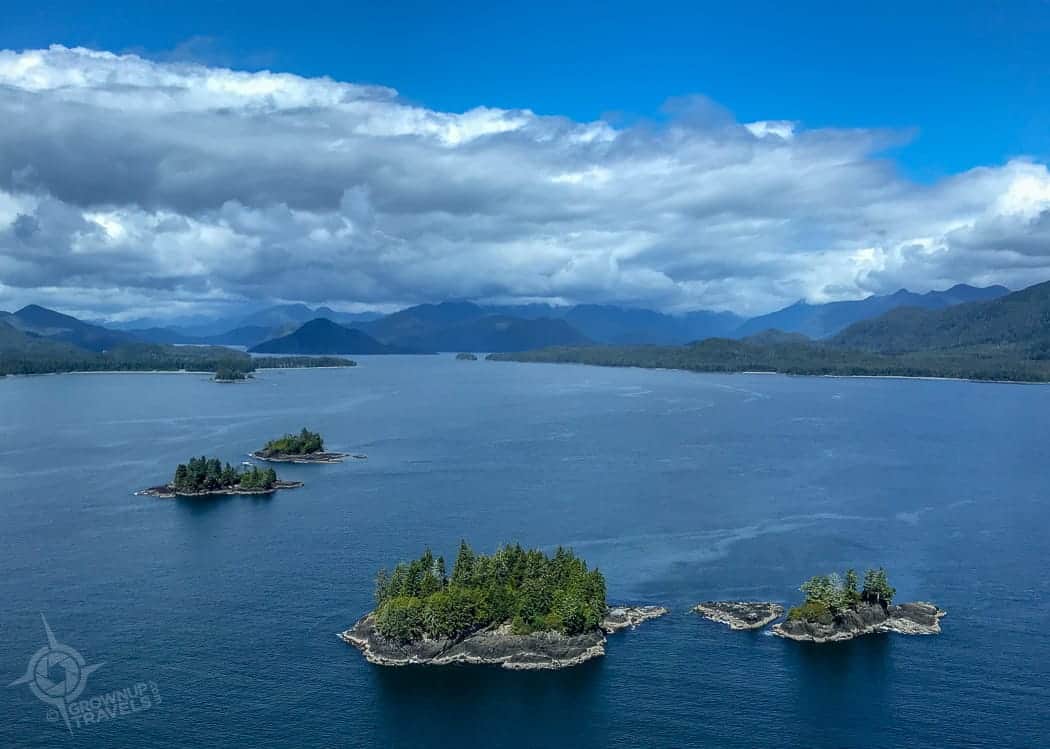 On calm days, some kayakers in the area will make the 3-mile paddle out to Vargas Island, popular for its proximity to Tofino and its sandy beaches. Our destination, however, was not so accessible. Instead, Antony piloted our helicopter to Tree Island, which despite its name was more rock than forest. Before landing, however, he flew us over a group of rocks where dozens of sea lions were basking in the sun, their brown bodies clustered on the edge of the rocky shoreline. 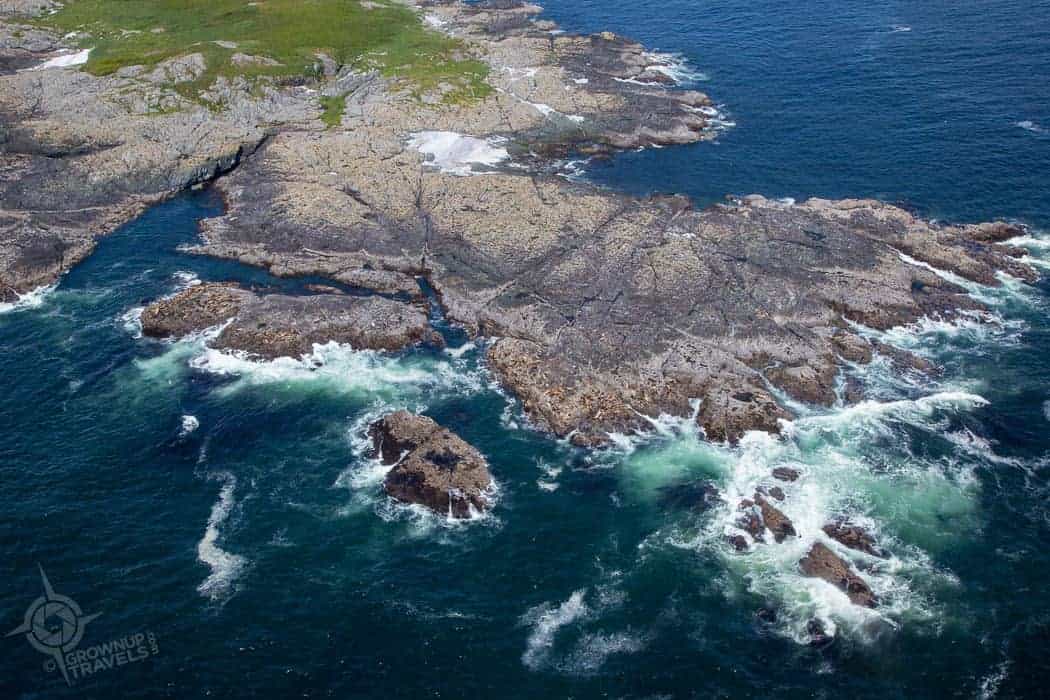 Can you spot the brown sea lions on the rocks? 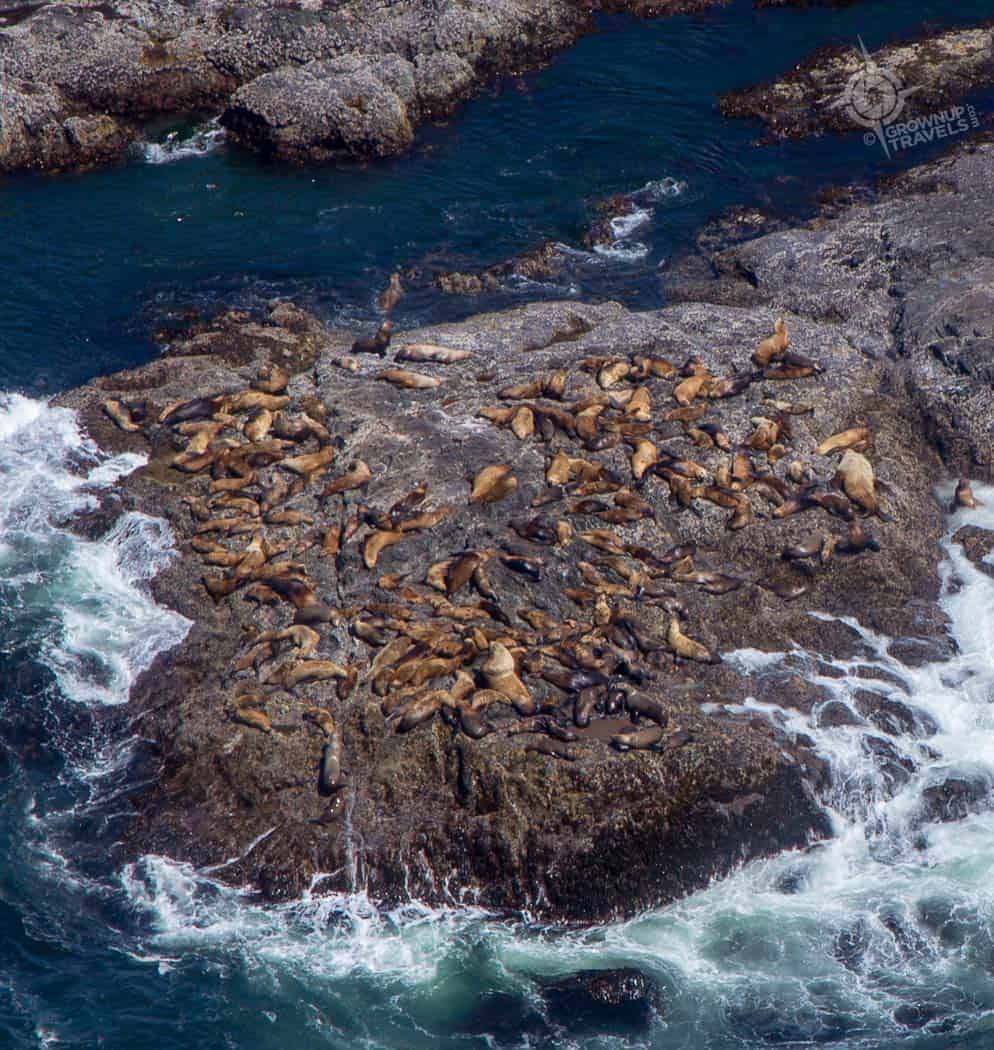 An Island All To Ourselves

Touchdown was as gentle and uneventful as takeoff, and next thing we knew, we were walking around Tree Island, feeling like VIPs as we set out to explore our own “private” island. 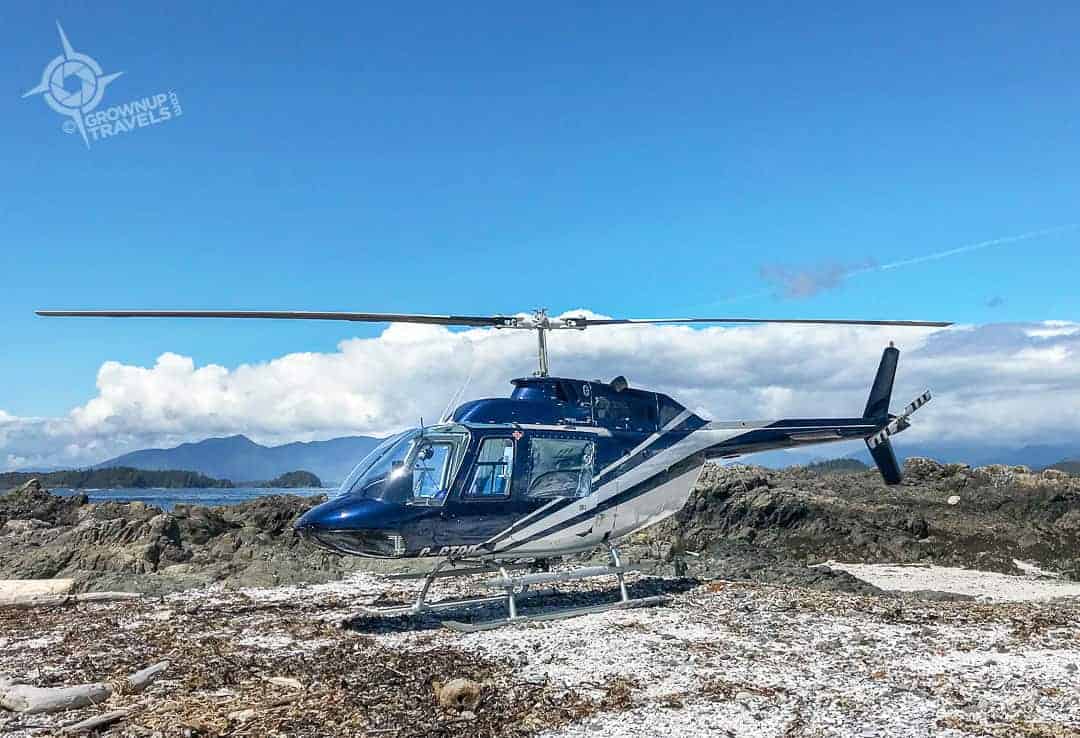 Our own private helicopter transportation!

Walking around the island, as small as it was, allowed us the chance to see some of the native flora as well as the massive logs that are thrown up on shore when the winter storms get particularly violent. 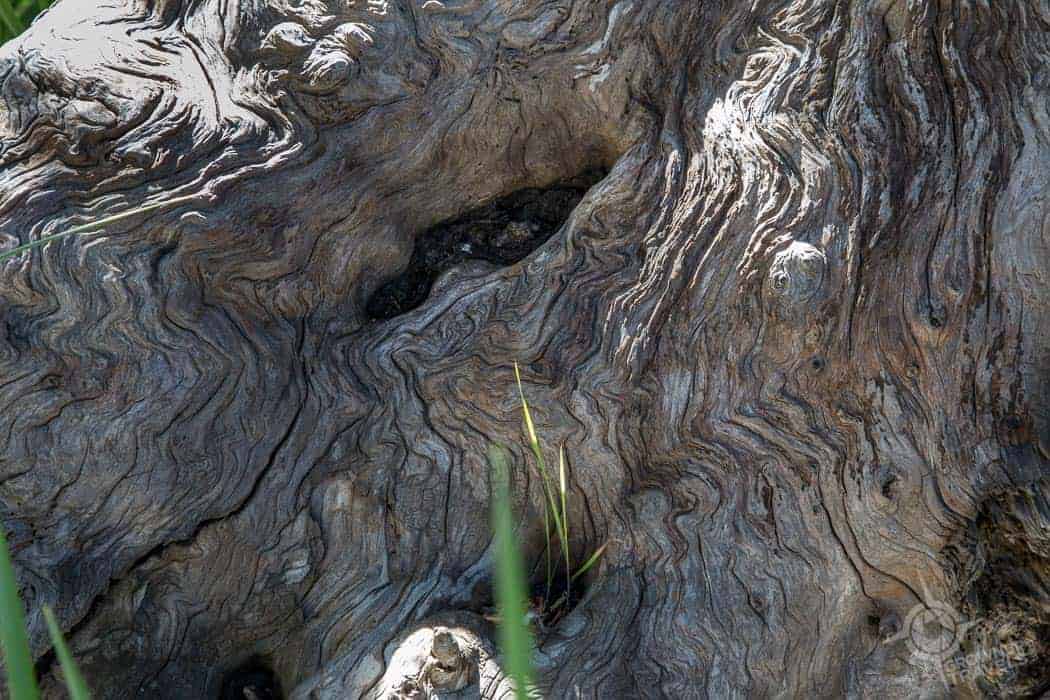 We also discovered several tidal pools tucked in between the rocks where anemones and other marine life went about their business, oblivious to our presence. 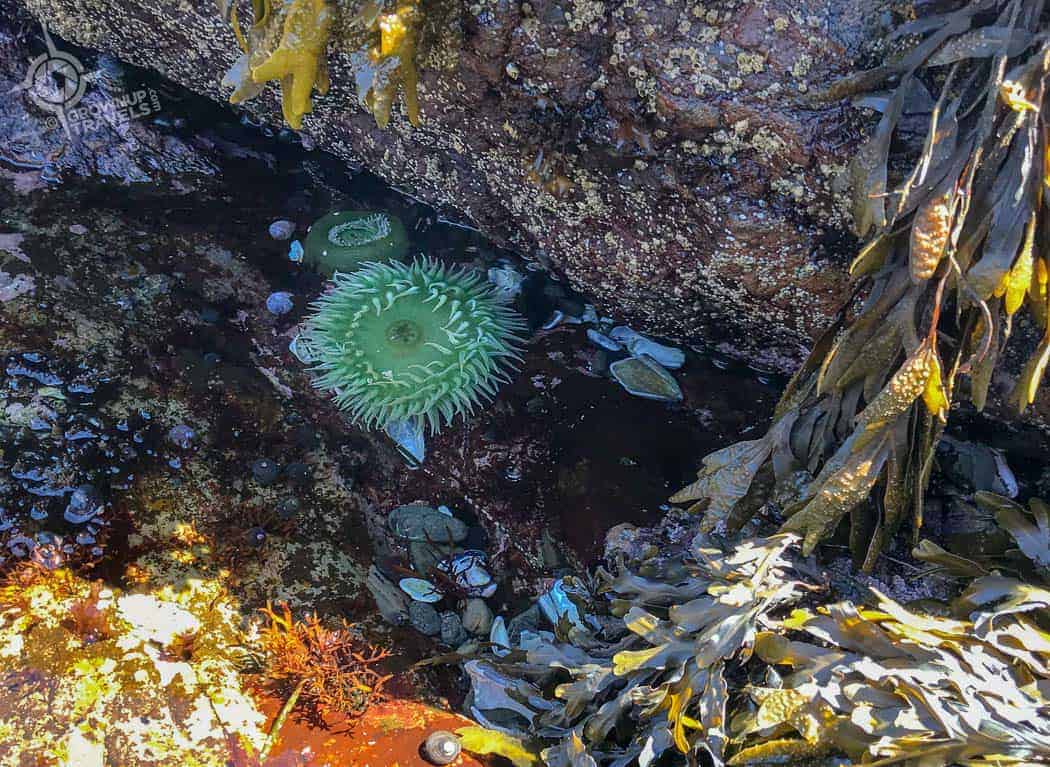 Green sea anemone looks like a jewel in a tidal pool

Sea-shells were everywhere, tossed aside by the mammals and birds who feed off these mollusks, and Antony pointed out a pretty mother-of-pearl shell which visitors aren’t allowed to remove due to the protected status of the Reserve. 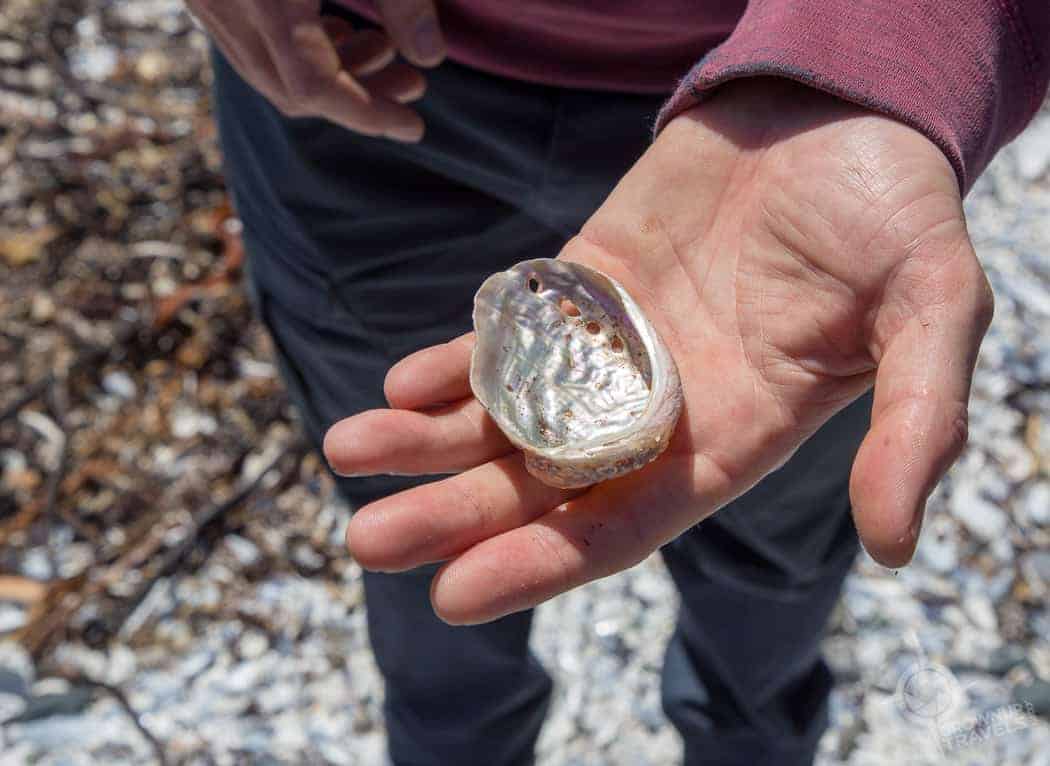 Half an hour or so later, we climbed back aboard our air limousine and headed south towards Tofino’s famous Long Beach, but not before seeing a few more beaches that were equally impressive, especially from our aerial viewpoint. 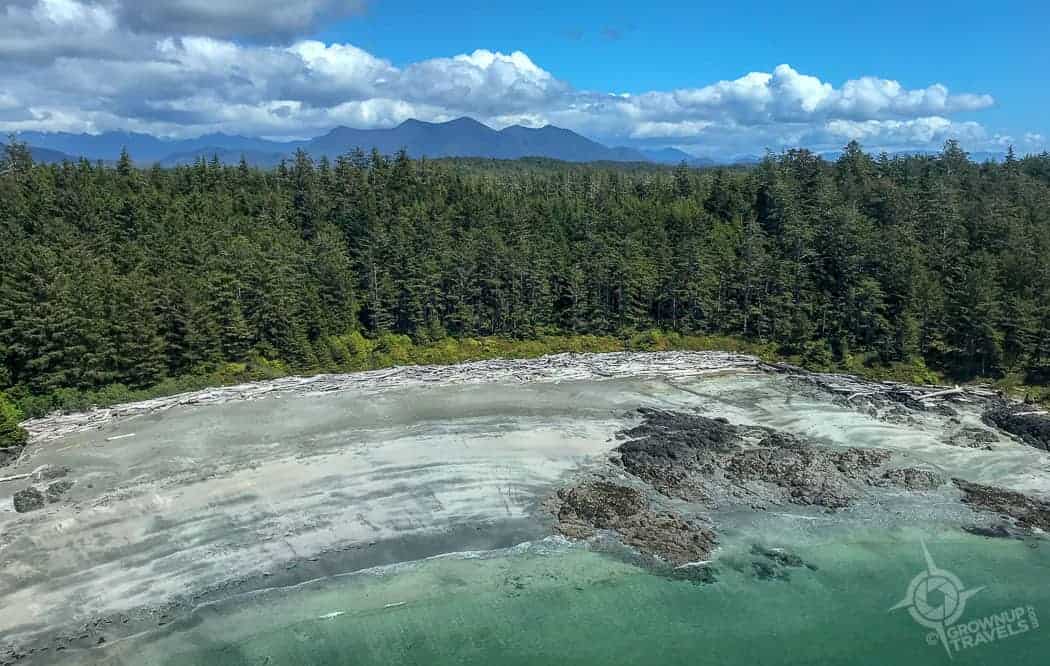 One of many beaches strewn with giant driftwood logs. 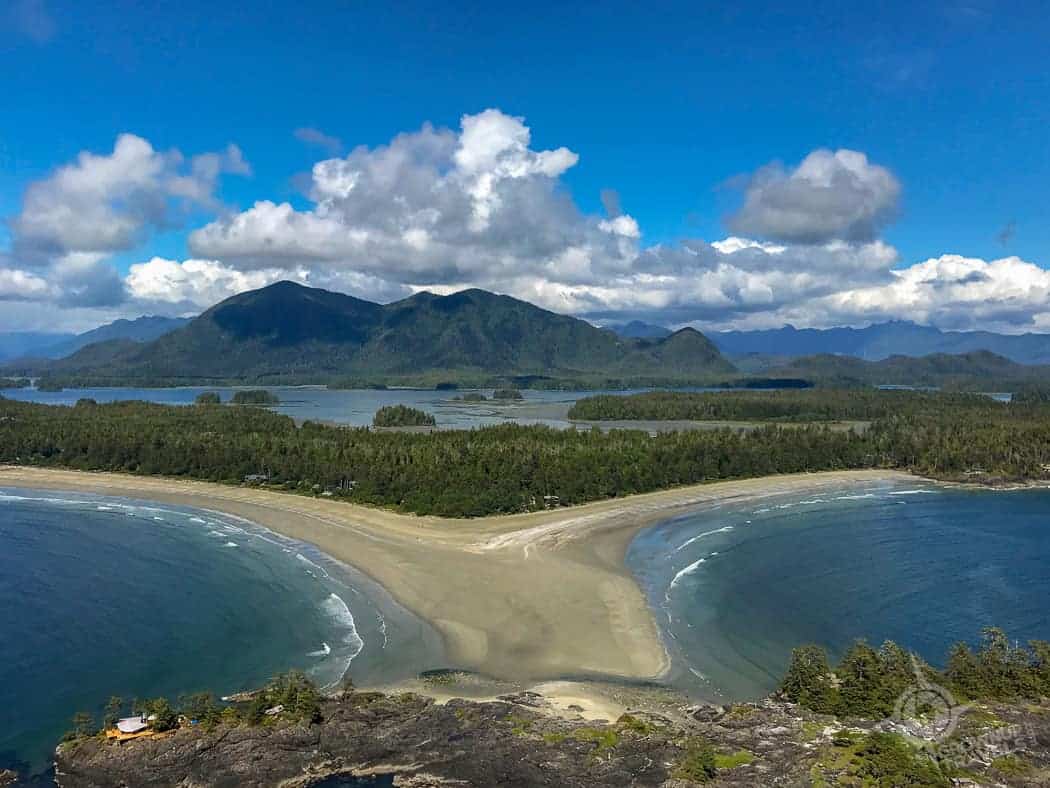 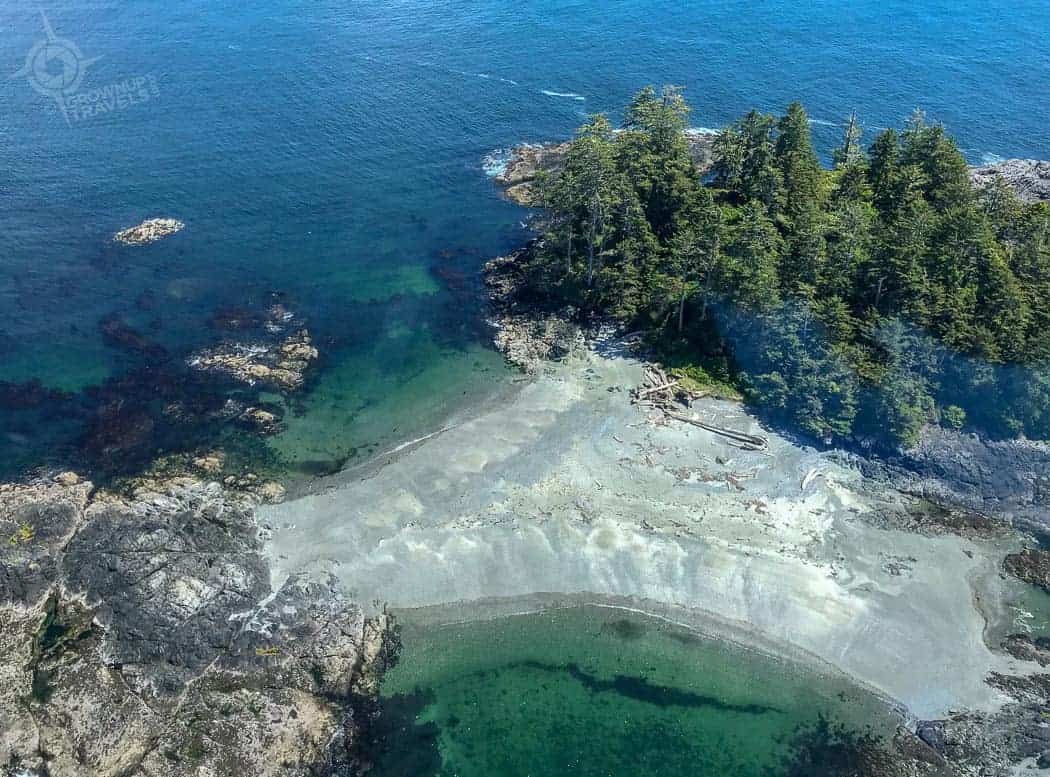 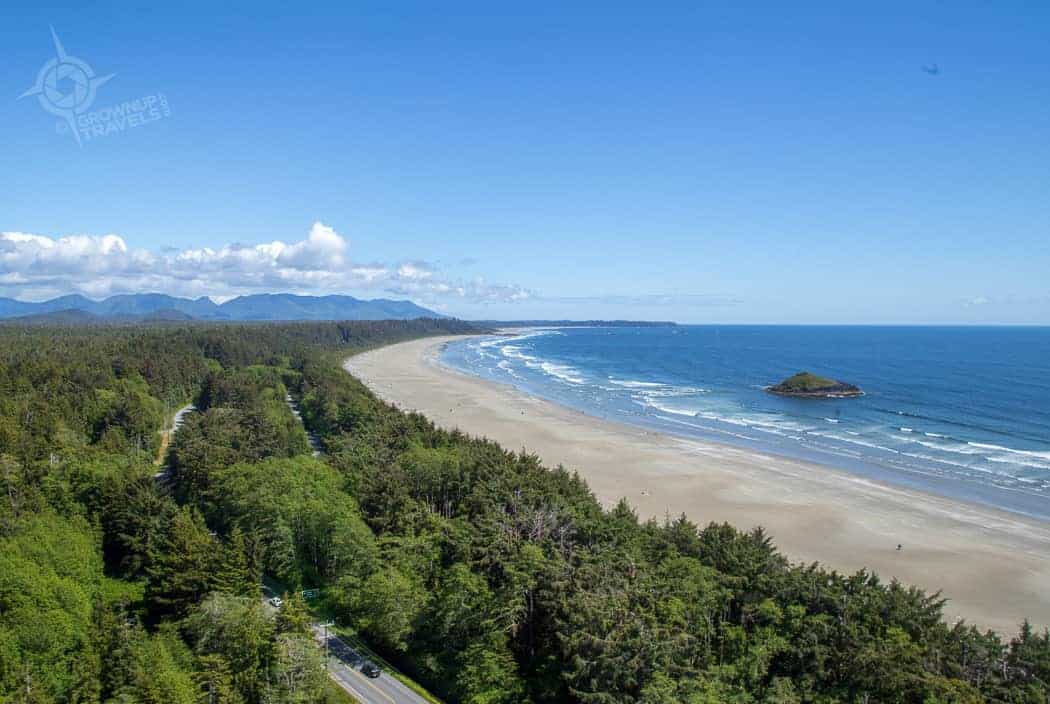 Whale Watching from the Air 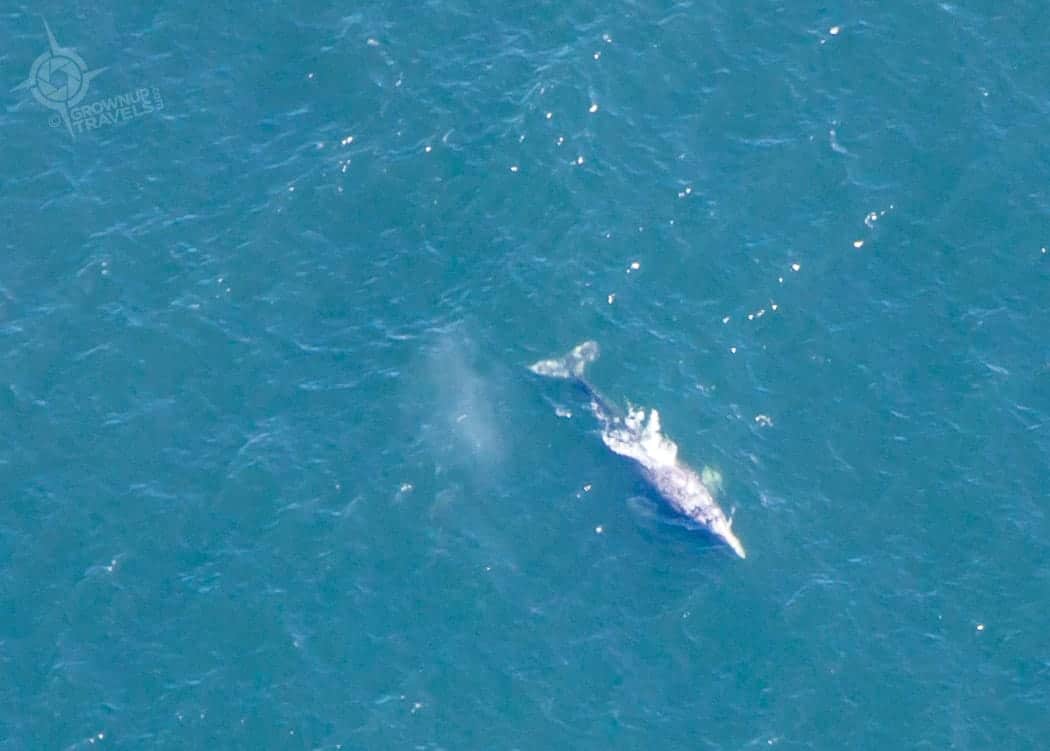 Aerial view of a grey whale surfacing offshore of Tofino

As promised, our tour was not set in stone, and before heading back to the airport, Antony spotted several whale-watching boats out on the ocean not far from Long Beach. Where there are whale watchers there are usually whales, and at this time of year, grey whales were the predominant species passing through the waters here. I’ve seen whales from boats, but there’s something about seeing these giant creatures from the air – especially close to the nearby boats – that puts their size into context. Especially when we could see how small the passengers on the boats and other kayakers appeared. 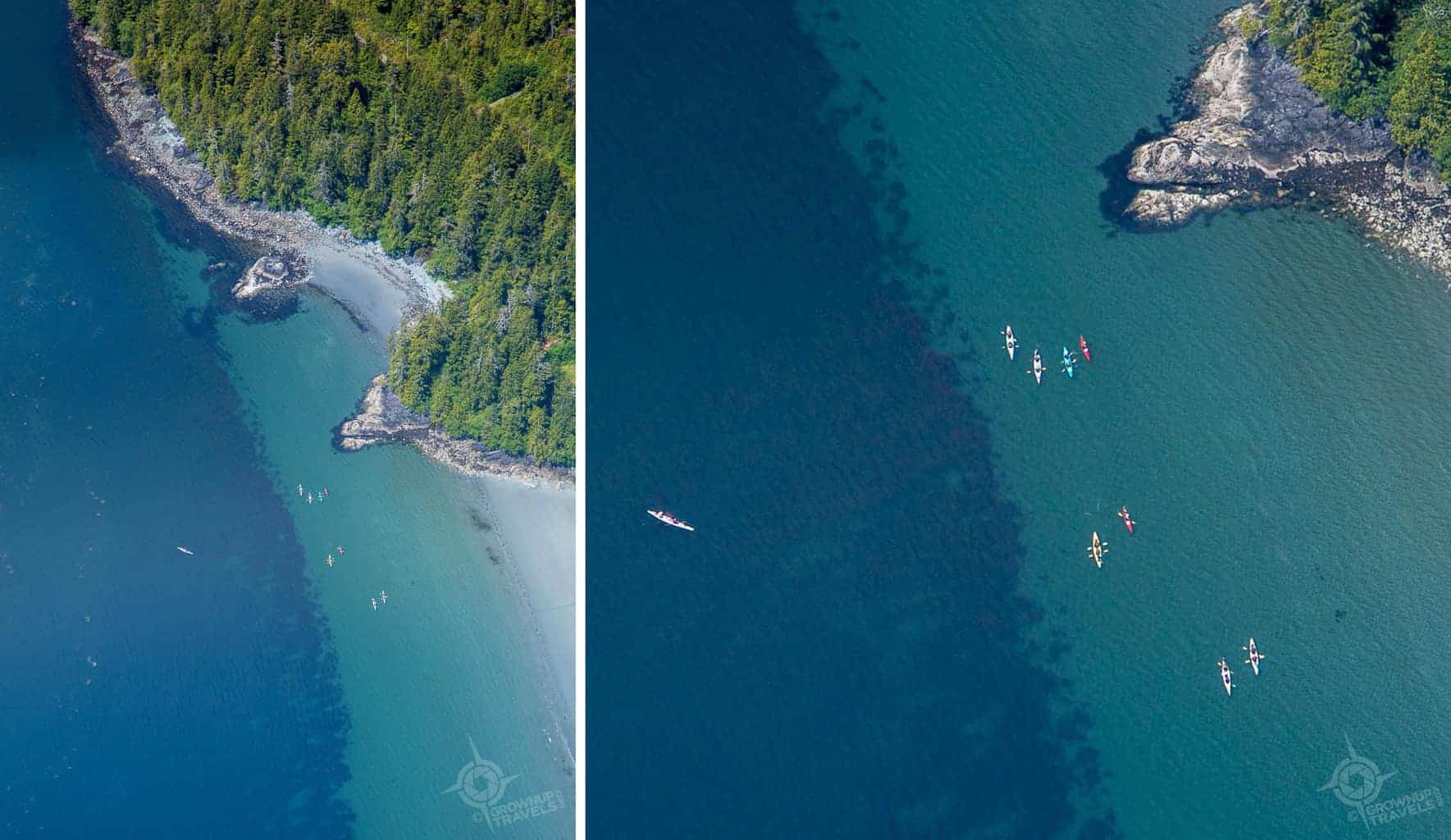 Kayakers seen from the air

Mountains, ocean, islands and wildlife – our heli-tour with Atleo was more than complete, and one of our fellow passengers, a woman who had travelled here from Peru, summed it up best: this was definitely one to check off her bucket list.

As for Henk and I, we returned to the hangar with what can only be described as a natural high – which is what Tofino and the wilderness that surrounds it is really all about. 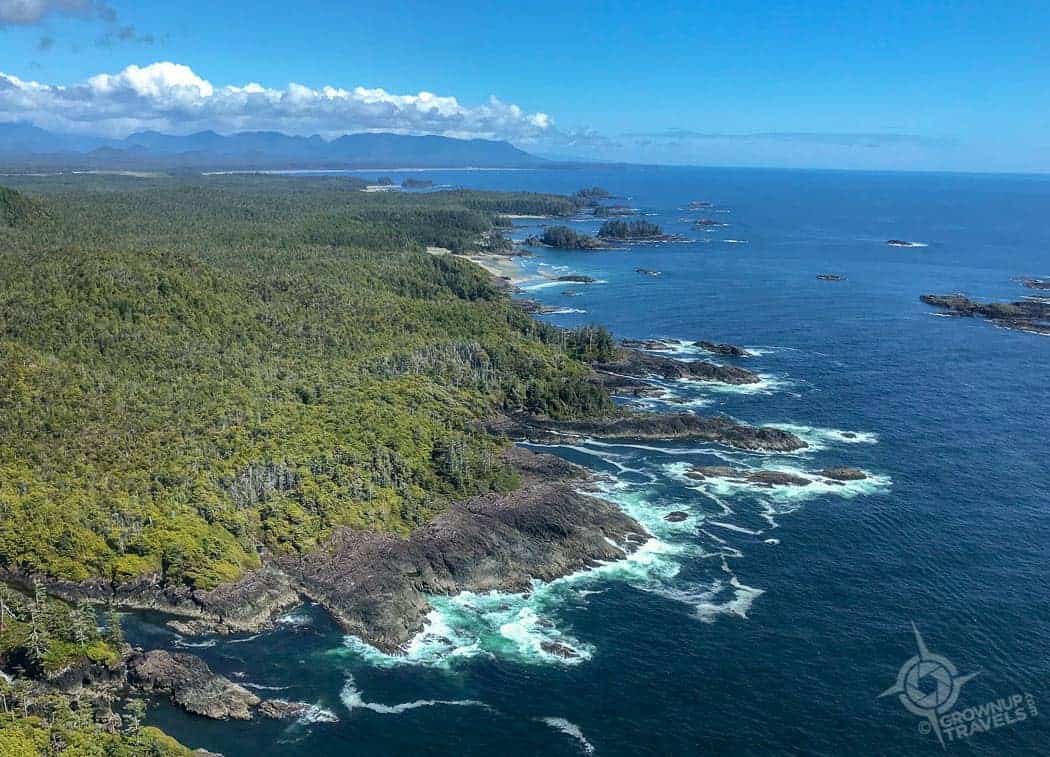 TIP: Heli-tours start from around $100 per person (our island hopper was $200). Or you can charter your own helicopter for a truly customized experience. View all the options on Atleo Air’s website. 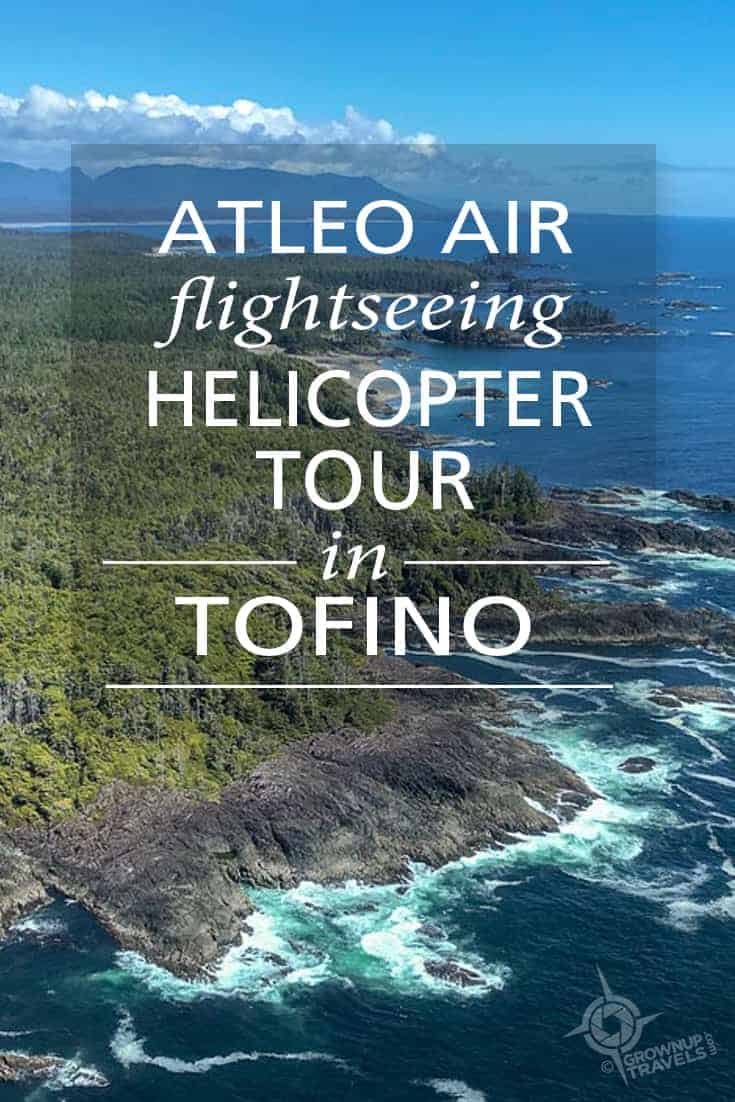 Special thanks to Tourism Tofino who provided Henk and I with a Media Passport, offering discounts on adventures and activities like this flight seeing tour of Tofino with Atleo Air. 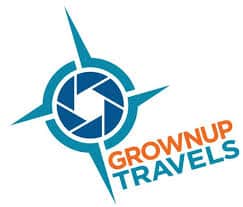