So we’ve complied this mega-list of Canada’s best sandy beaches to guide your travels to the summer sun-worship vacation of your dreams. No matter where you live in Canada, or where you’re travelling to, you’ll likely find yourself within striking distance of these gorgeous shores.

Starting in the West, moving through the East and up North too, here are Canada’s 100 best beaches: 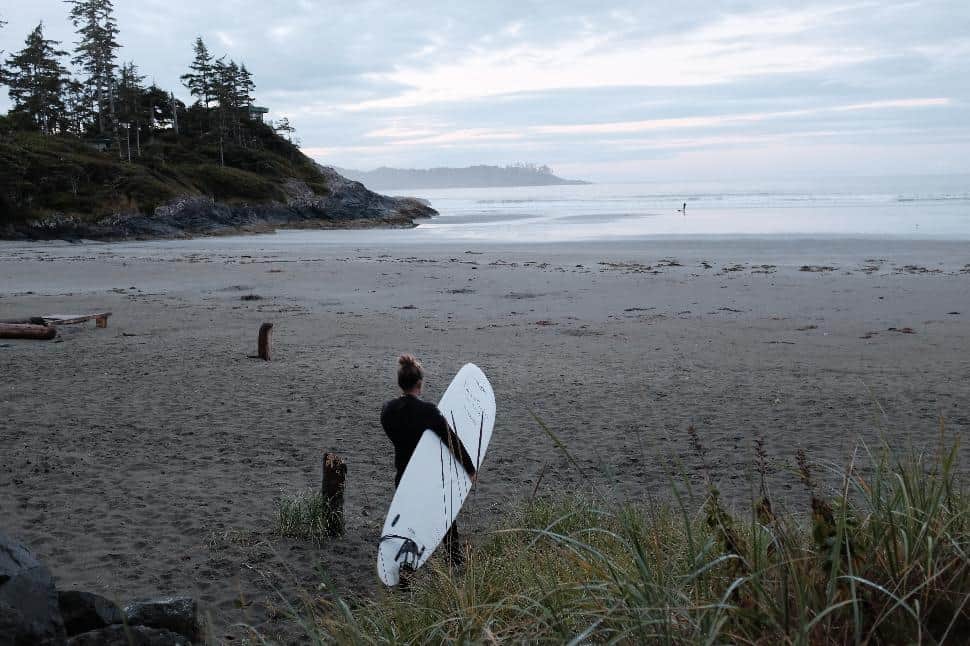 North and South Chesterman beaches are some of Tofino’s finest—and that’s saying something, given that this town boasts some of the world’s most beautiful coastline. Off-leash for dogs, campfire friendly and offering excellent surf year-round, these twin beaches are paradise. At ebb tide, you can walk over the tombolo separating the two sands; at flood tide they become two sides of a similar coin. (Also pictured at top.)

Locals call this one “Tree Island”—it looks like an islet where you might find pirate booty, but instead, you’ll find a ring of sandy beaches, arid fields and dense forest. This 30-hectare park is accessed by foot via sandy isthmus at the northern tip of Denman Island during low tide, or anytime by boat from Union Bay (Vancouver Island). Day trip or camp out—no facilities. 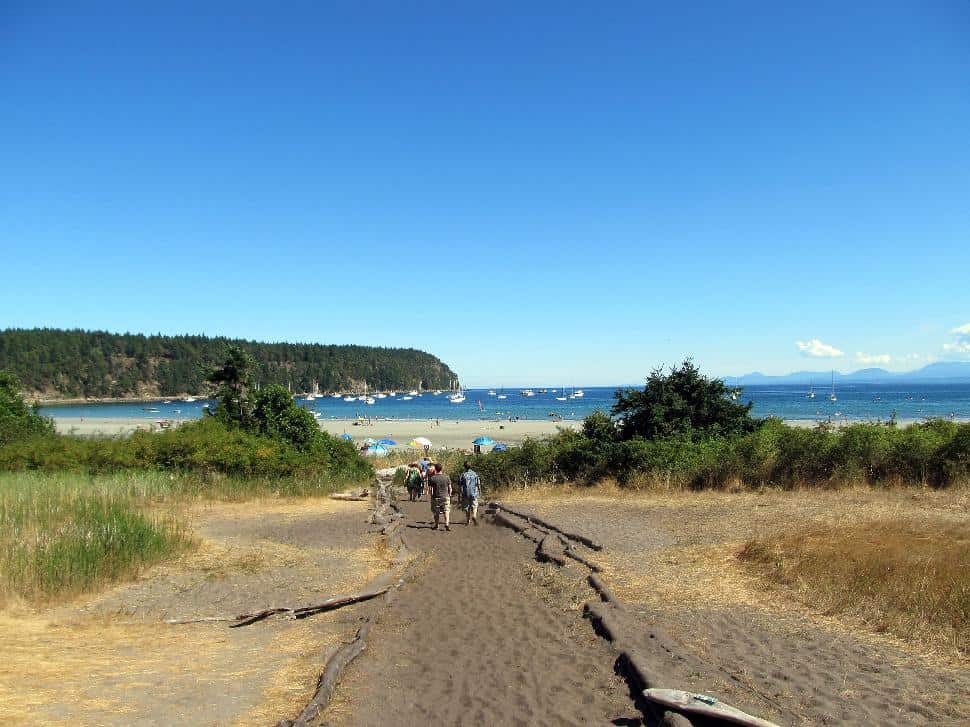 Your eyes aren’t deceiving you—this is BC, not the Caribbean. An absolute gem accessed via two ferry rides from the central east coast of Vancouver Island, Tribune Bay, on Hornby Island, offers one kilometre of fine white sand and temperate swimming. It can be busy during the summer months—but is nearly empty during the moody and dramatic West Coast shoulder-seasons.

Imagine a 2.4-kilometre crescent of white sand, backed by dense coastal rainforest and lapped by rolling Pacific waves. Now imagine you’re the only person there. Welcome to Nels Bight, a secluded stretch of sand on northwestern Vancouver Island at the end of a 17-kilometre trail. Backcountry camping permitted onsite—and necessary unless you fancy a 34-kilometre day-hike.

There’s no easy way to get to Savary Island. It often requires multiple ferry rides and eventually a water taxi or even a float plane. But the best secrets are often well-kept. At 7.5 kilometres long by one kilometre wide, this island is ringed by whitesand and lapped by the warmest waters on Canada’s Pacific coast. South Beach is one of the longest sandy areas, but you can’t find a bad beach on Savary. 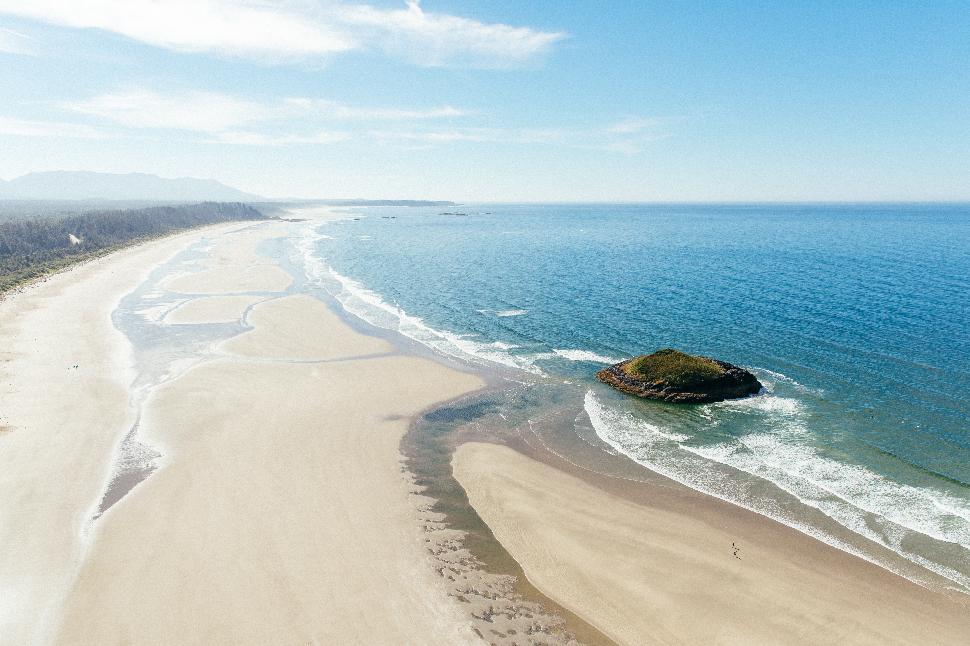 Long Beach is defined by one word: epic. With a total length of 16 kilometres, pristine silver sands and expansive vistas into the vast Pacific—marked by Incinerator Rock—this is the epicentre of Canada’s surf culture. As part of a national park, the highest conservation standards are upheld—but feel free to lounge, stroll, build sandcastles, surf, skimboard and simply bask in the West Coast’s finest natural surroundings.

Just shy of two hours from BC’s capital city, and a key stopover on the Juan de Fuca Marine Trail, Sombrio Beach is a highlight of southwestern Vancouver Island. Home to a strong local surf scene, as well as a scenic ribbon of iron-grey sand overlooking the Strait of Juan de Fuca, it’s accessed by a 250-metre trail from the parking lot on Highway 14. Backcountry camping permitted. 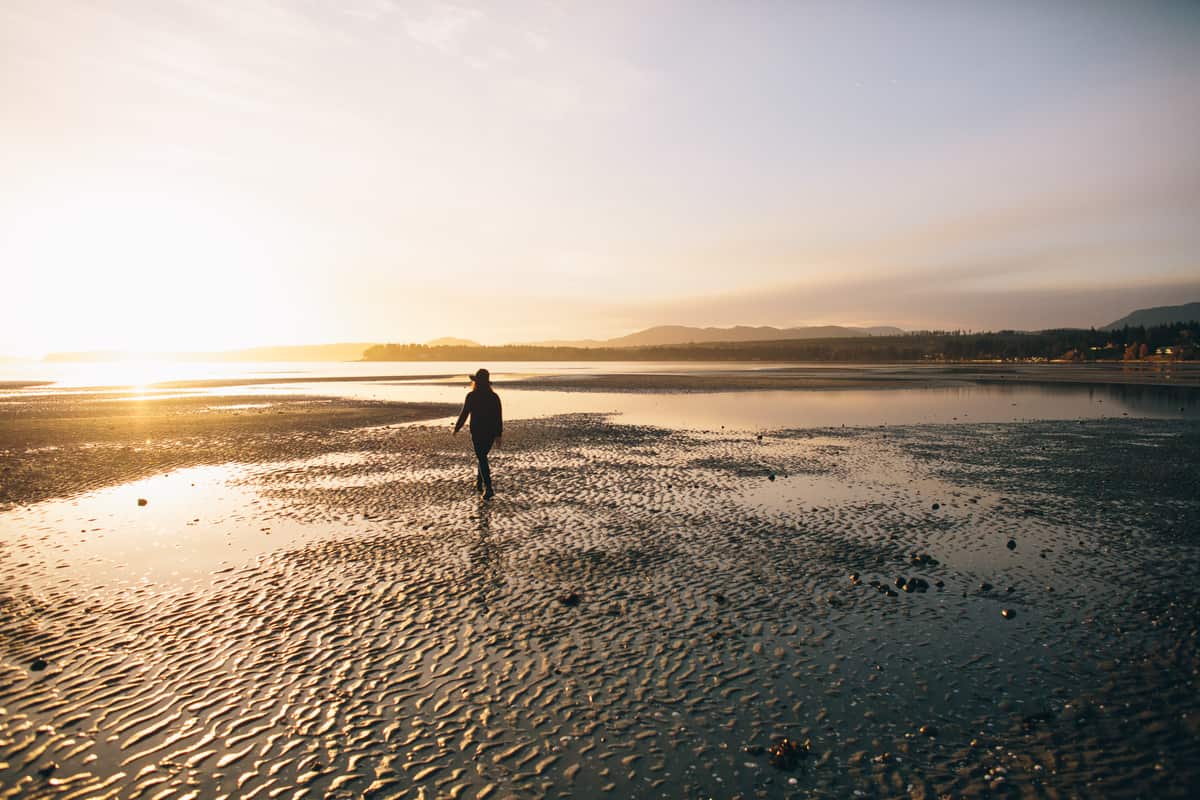 A beachfront park of almost 16 hectares attached to a lively downtown just a few minutes’ walk from the water has fostered the epicentre of beach culture on eastern Vancouver Island. During summer, the seawater can exceed 20 degrees Celsius; ideal for swims. Volleyball is a summertime staple, as are ice cream vendors, elaborate sandcastles and annual events. Stay nearby at one of the waterfront hotels.

Set just outside of downtown Victoria, in Oak Bay, this delightful southeast-facing ocean park features a two-hectare grassy area with playground next to a crescent of soft sand and a calm bay. It’s also home to the University of Victoria Sailing Club, as well as the mythical Cadborosaurus—a monster said to slither through the Salish Sea. 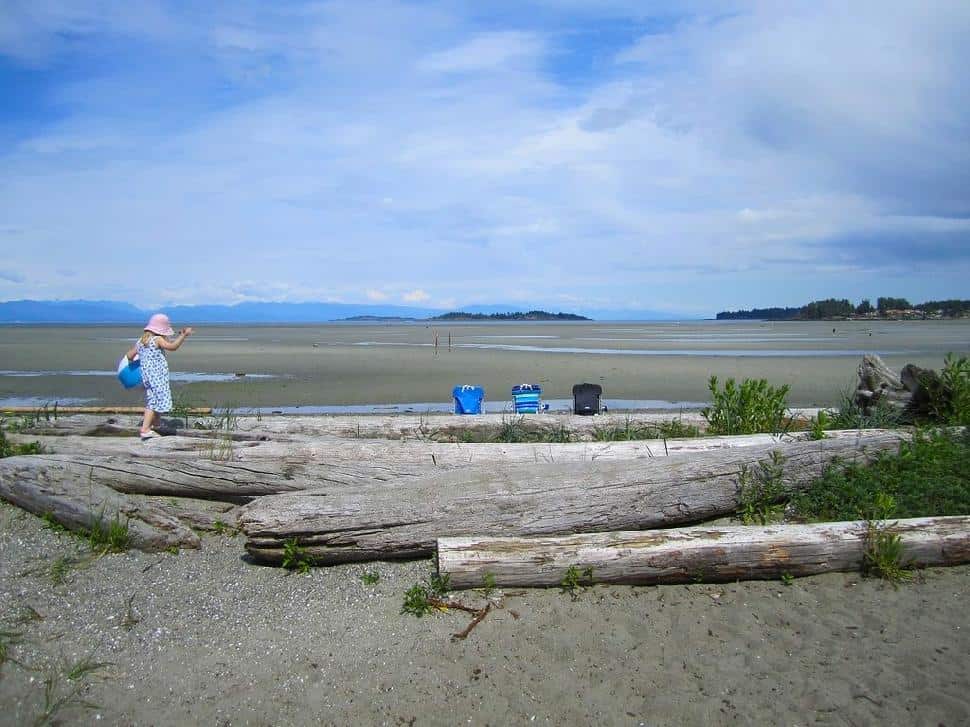 This 347-hectare park, set south of downtown Parksville, is home to a showpiece two-kilometre beach, that, at low tide, ebbs into a massive sandflat popular with birdwatchers, sandcastle-builders and sun-worshippers. Campsites are located nearby, in the thick Douglas-fir and arbutus forest, and luxury resorts are also a few-minutes’ drive away.

Set next to the town of the same name on the largest and northernmost Gulf Island in the Salish Sea, Gillies Bay offers an expansive stretch of sand with excellent beachcombing and tidal pool exploration. Time your visit to low tide and you’ll enjoy hours of beach walking complemented by expansive views towards Hornby, Denman and Vancouver islands to the west. 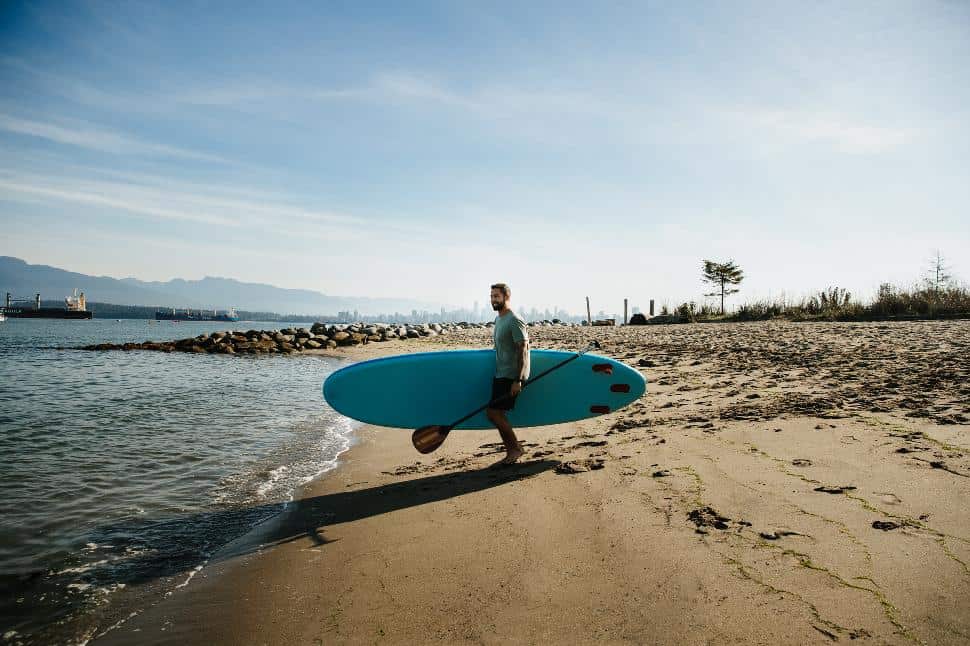 Stretching for almost three kilometres along Vancouver’s west side, Spanish Banks is one of the great urban beaches of the world. Soft golden sands. Dozens of volleyball courts. A vibrant social scene. Food vendors. But the main reason? Head there at an extreme low tide and you can walk a kilometre offshore, revelling in forest, mountain and urban views along the way. Dogs are allowed off-leash at the western edge.

The “boundary” in this park refers to the international border between Canada and the U.S—albeit the diminutive offshoot of Point Roberts, Washington State. It’s a lovely spot for families, with expansive sands, quality birdwatching, lengthy nearby trails, washrooms/change rooms, a concession stand and transit access. In summer, tidal pools invite wading and reliable winds allow for kite-flying and kite-boarding. 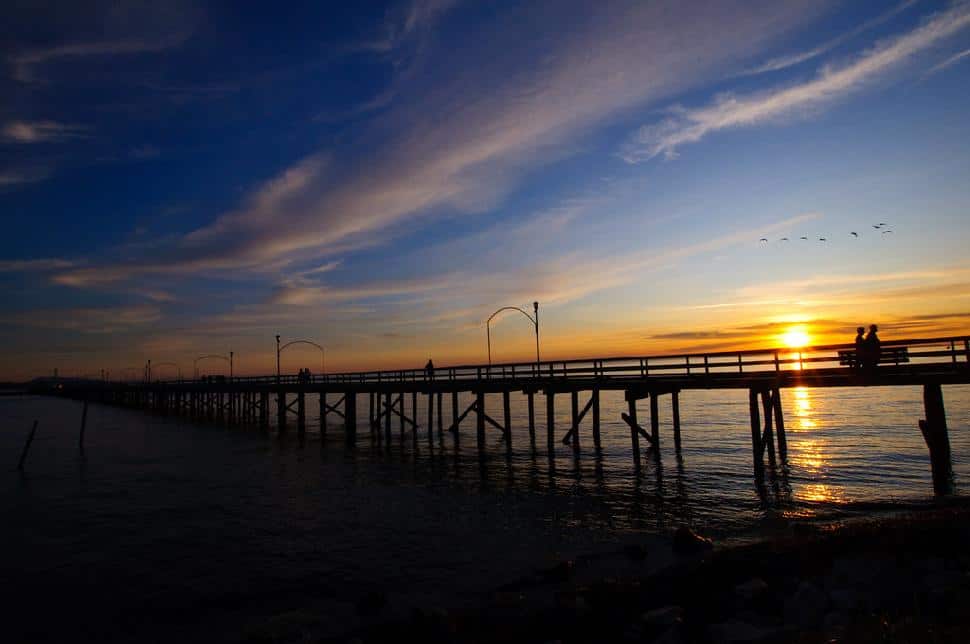 A gorgeous eight-kilometre-long sandy beach looking out to Semiahmoo Bay and backed by a bustling boardwalk, White Rock is where Vancouver-area families go for the best beach days. Grab an ice cream and stroll the boardwalk. Build a sandcastle on quiet East Beach or plunge into the cool waters from the White Rock Pier (high tide only, be careful!) on West Beach.

A crystal waterbody surrounded by lush mountains and ringed by sandy beaches—paradise. Cultus Lake is a beloved summer recreation spot for Fraser Valley locals. Swim in the temperate waters. Head to the nearby waterpark. Soak up the sun in some of the warmest summer temperatures in southwestern BC. But get there early—the secret is long out on this lakeside paradise. 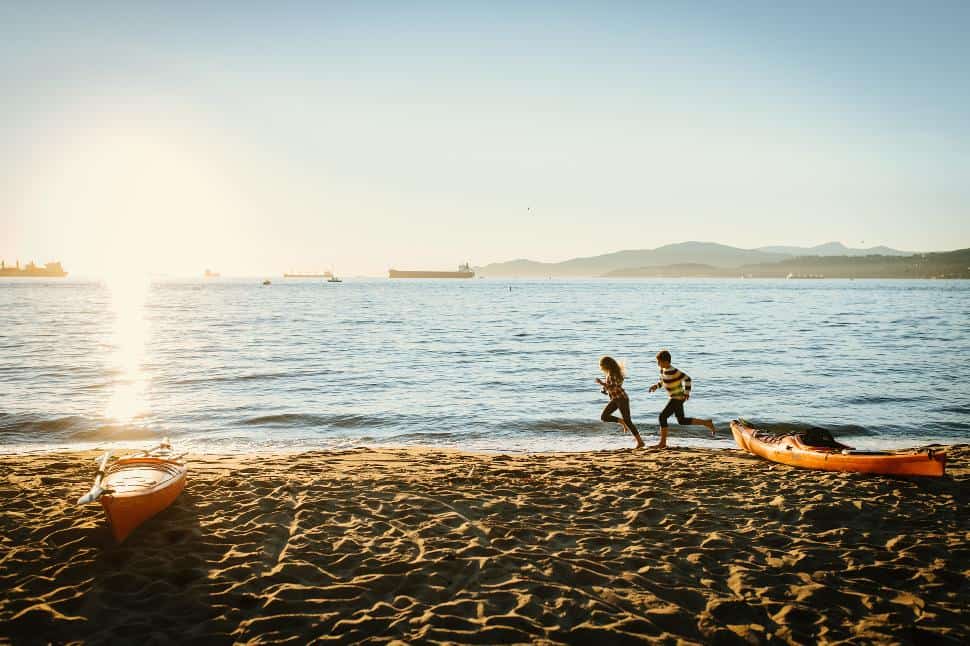 Set next to the iconic Stanley Park Seawall on Ferguson Point, it’s hard to believe Third Beach is just minutes from one of the busiest downtowns in Canada. Backed by lush forest and looking across English Bay and the Burrard Inlet, this stretch of sand is a busy-but-manageable summer respite and a must-stop while cycling the seawall around 400-hectare Stanley Park.