The former logging and fishing village on the west coast of Vancouver Island is renowned as the surfing capital of Canada, but there is also incredible whale watching, tours to see black bears, gorgeous scenic hikes and an exceptional culinary scene. 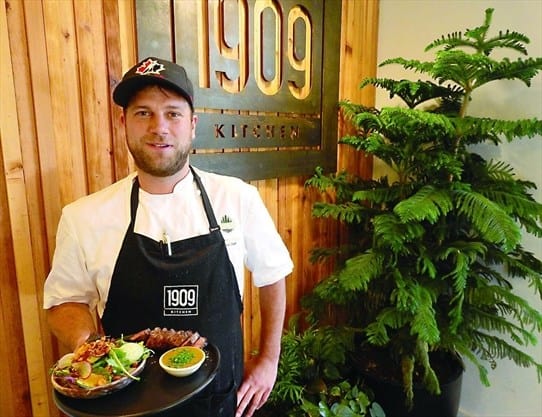 Tofino has a lot to brag about.

The former logging and fishing village on the ruggedly beautiful west coast of Vancouver Island is renowned as the surfing capital of Canada, but for those of us who can’t “hang 10,” there is also incredible whale watching, unique tours to see black bears, gorgeous scenic hikes and an exceptional culinary scene.

In addition, storm watching was born in Tofino, which is surrounded on three sides by the moody Pacific Ocean.

“Every November through February Mother Nature puts on a show with roaring waves as high as 20 feet, gales howling between wind-bent trees and ample rain to keep the rainforest thriving,” said Lynda Kaye, Tourism Tofino’s media relations manager. “Guests are given a Tofino tuxedo, which is rain gear so they can get out onto the beach during a rainstorm.”

Since Tofino and the rest of Vancouver Island has the mildest climate in Canada, it is a great place to visit year-round.

“We are quite busy in the summer,” Kaye said, adding the village, which has a population of 2,000, is visited by up to a million people each year. She recommends visiting in late summer if you don’t have kids, or between late September and the end of May.

“We don’t get gruesome weather here. It is usually pretty mild. It doesn’t get below freezing very often and we get a fair amount of sunshine year-round.”

On a recent four-day trip, my husband and I experienced a lot of what there is to see and do in Tofino, and fell in love with the area.

The boasted about views did not disappoint, with the emerald old-growth forests of Meares Island and the soaring peak of Lone Cone Mountain as magnificent backdrops.

During a Tofino Resort and Marina whale watching and crabbing trip, Capt. Liam MacDonald gave us a bit of a history lesson. He said the First Nations village on Meares Island is one of the earliest known settlements in North America and that in 1993 the island was the site of one of the greatest acts of civil disobedience in Canadian history.

“It was between loggers and environmentalists, who chained themselves to trees,” he said. “The island’s old growth rainforest was little touched by logging but loggers persuaded the government to let them log the island. Eight hundred people were waiting for them and blocked the road to the logging company’s site. All 800 were arrested but world pressure forced the government to let everyone go and give the land to the natives.”

Prior to starting our wildlife adventure tour, MacDonald dropped two crab traps into Clayoquot Sound. If we were lucky, some Dungeness crabs would be attracted to the fish heads used as bait and we would enjoy a “Cook your Catch” dinner at the marina’s 1909 Kitchen that evening.

Some luck was also needed to see a whale, and thanks to MacDonald’s eagle-sharp eyes, we enjoyed watching a large grey whale and two juveniles swimming in 18 metres of water and diving to the bottom where they scooped sand and sifted it through their baleen to get ghost crab larvae and small, shrimp-like creatures to fill their bellies.

We also saw a Steller sea lion and his harem, some harbour seals with their puppylike faces, several bald eagles and their massive nests, and adorable sea otters which often carry a favourite rock in the fold of their skin to use when cracking open shellfish. They will keep this one rock for their entire lives, if they don’t lose it.

At the end of the trip we retrieved our traps, which had five red rock crabs in them. Since these are not that tasty, we opted to release them and instead enjoy something off the menu at dinner.

The next day we saw the area from a different vantage point, having booked an offshore island helicopter tour with Atleo Air. After incredible views of mountains, Clayoquot Sound and of Tofino itself, we landed on the rocky shore of Flores Island at low tide. We beachcombed for treasures, including sea glass, and clamoured over large boulders and massive logs to look for whales. It is an untamed and isolated place — perfect for getting away from it all.

On our third day we were back on the water, this time on an Ocean Outfitters bear watching zodiac tour.

Capt. Dave Hull took us on a similar route as our first wildlife tour, and we were thrilled to see the otters, sea lions and harbour seals again, the latter which he called 300-pound, six-foot-long “sausages of the sea.”

Then we were off to see “the fuzzy ones on shore.”

Hull told us there are approximately 7,000 bears on Vancouver Island and the best time to see them is at low tide. First, we saw a skittish yearling who headed back into the bush upon hearing the boat. Shortly after that, we came across another young one who also bolted for cover.

Finally, Hull spotted a third bear, which wandered the shore, easily swiping large rocks aside to feed upon the small invertebrates hiding underneath. He said the bears also feast on porcelain crab, mussels, barnacles, carrion and small fish trapped in tidal pools.

For most people this would have been enough wildlife viewing, but not for us. We also love to be on the water.

So, on our final day we headed out again, this time with The Whale Centre, hoping to see more of the behemoths.

Our captain, Howie Tom, was funny, knowledgeable and passionate.

Once again we saw the lovable otters, bellowing sea lions and acrobatic seals, before heading for whale territory. Soon Tom, nicknamed the whale whisperer, saw the telltale sign of a whale — its “blow.”

He knew it was a grey whale named Lasso that passes through the area every year. We all fell silent, taking in the majestic creature that can hold its breath for up to one hour and grow to be 19 metres long.

Tom said 20,000 grey whales migrate through the area every year, travelling from Mexico to the Arctic, an approximately 19,000-kilometre round trip. “It is one of the longest migrations of any mammal.”

Our tour was near its end when Tom received a report that a humpback whale had been spotted seven kilometres offshore. He asked everyone if they wanted to see it, and then gunned it. We flew by rugged coastline, stopping briefly to see a rare puffin paddling in the water.

The humpback was awesome, raising its tail flukes on deep dives and blowing regularly, staying in the area to feed despite our presence. It was thrilling.

Jennifer Steven, who was born in Tofino and has owned The Whale Centre with her husband John Forde since 1997, said she never gets tired of seeing whales. In fact, they both volunteer for the Strawberry Isle Marine Research Society (SIMRS), and collect killer whale data and take identification photos that are sent to the society and Department of Fisheries and Oceans.

She added they often go out on their own to go adventuring in Clayoquot Sound and to photograph wildlife.

“We both have a passion for photography, conservation and wildlife. If we are not in the office working then you can find us out on our boat. We love seeing whales that are frequent visitors or new whales that are rarely seen.”

She added they donate $3 per guest to local education, research and conservation.

“We both feel it is important to give back to research and help keep our local beaches clean and pristine.”

We ended our visit by hiking the Pacific Rim National Park’s Rainforest Trail and the Wild Pacific Trail’s Lighthouse Loop. Both had amazing views, whether mystical moss-covered trees or massive rock formations along the coastline.

Our time in Tofino was at times tranquil and at times exhilarating — just the way we like it.

“New restaurants are opening every year,” said Lynda Kaye, media relations manager for Tourism Tofino, adding, “We have an extraordinary number of very good restaurants and acclaimed, award-winning chefs who are producing a boat to table scene.”

These establishments, which range from family friendly to fine dining, are not just catering to the 2,000 residents, but also to the approximately one million visitors that the village on the west coast of Vancouver Island gets each year.

One culinary star is Paul Moran, the executive chef at Tofino Resort and Marina’s 1909 Kitchen and Hatch Waterfront Pub, who was crowned Canada’s top chef in May on the TV show “Top Chef Canada Season 7.” He is an avid forager and passionate about locally sourced food, incorporating it into dishes such as Dungeness crab cocktail, wood roasted black cod, side stripe shrimp, and bacon sausage pizza. He will also create a meal for you using your own sport caught fish or seafood.

The two restaurants have sweeping ocean and mountain views and are the perfect place to watch a sunset.

And speaking of views, The Pointe Restaurant at the Wickaninnish Inn is a must visit. It sits atop cragged rocks overlooking the Pacific, giving diners a 240-degree view of the pounding surf, a sweeping beach and nearby islands.

If you want to watch surfers while dining in a warm living room setting, head to The Great Room at Long Beach Lodge Resort. It has a gorgeous view of Cox Bay Beach and executive chef Shaun Snelling’s innovative menu is sure to please with entrées such as roasted lamb, shrimp and clam pasta, and tuna tataki.

Those with a sweet tooth will want to visit Chocolate Tofino, which has more than 18 flavours of homemade gelato as well as fresh handcrafted gourmet chocolates and truffles, bars, bark and dipped fruit.

“It’s time-consuming but worth it,” Cam said, adding some of the shop’s other specialties are their organic lavender truffle, and wildflower honey ganache chocolate.

Specialty coffee shops abound, including the Rhino Coffee House and the Common Loaf Bake Shop. And one of the newest eateries, Shed Tofino, offers a fun vibe coupled with a locally sourced fresh menu.

With more than 35 places to eat at in Tofino, there is definitely something for everyone.