Home News + Blogs Ski and surf on the same day. But in Canada? Yes 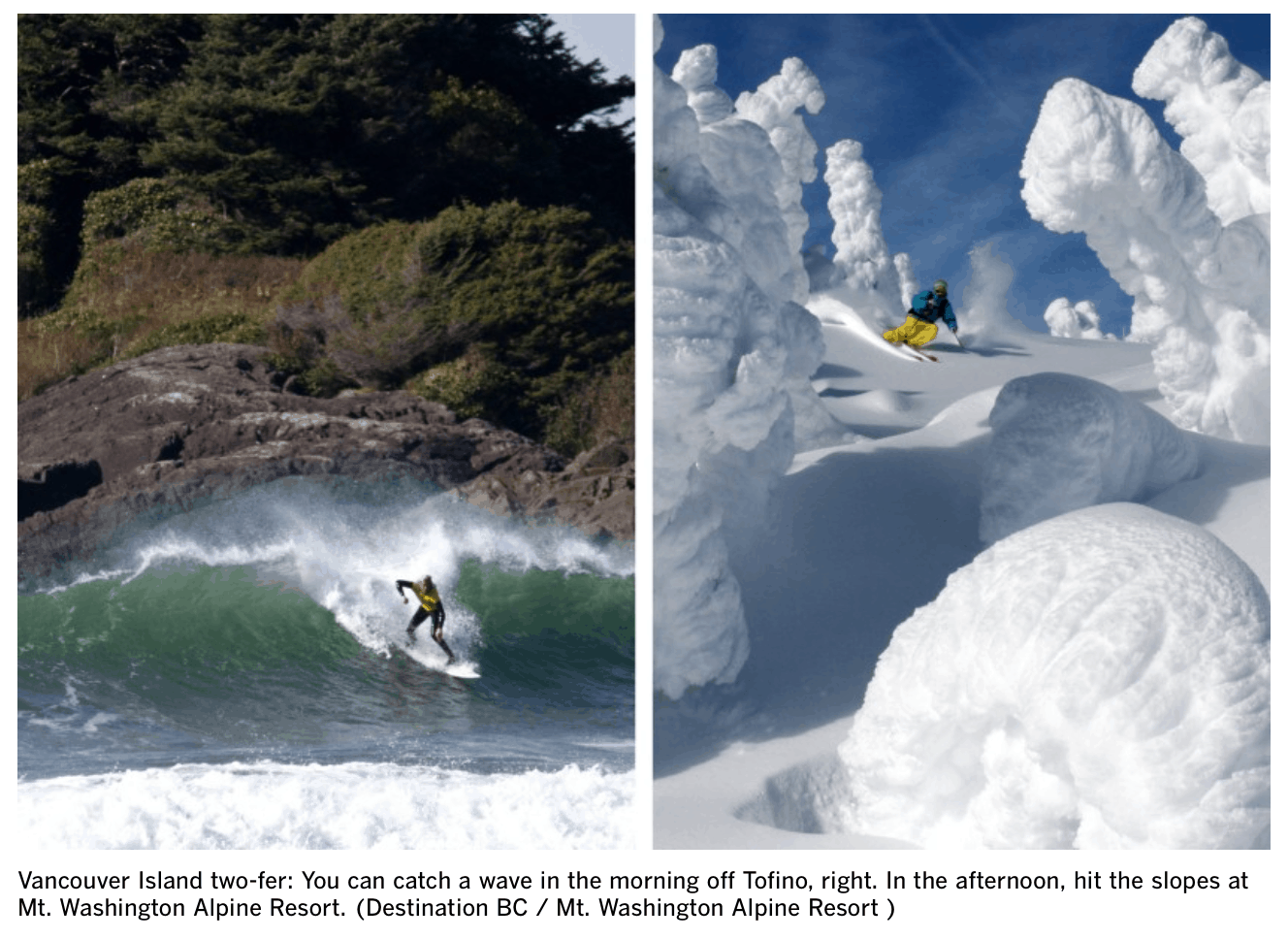 Last winter, I vowed to tick off the oldest dream on my bucket list: to surf and downhill ski on the same day. Although I know it’s possible in Southern California, Morocco and Chile, I wanted to pull it off in British Columbia, an unlikely location and my home province.

Even fewer, including most Canadians, know that Vancouver Island is also home to B.C.’s best-kept ski secret, Mt. Washington Alpine Resort, which routinely records the biggest snowfalls of any ski resort in Canada and sometimes in all of North America.

To reach Tofino, I took the scenic 1½-hour ferry from Horseshoe Bay in West Vancouver to Nanaimo, on Vancouver Island’s eastern coast. Then I drove cross-island for three spectacular hours past Cathedral Grove’s giant ancient cedars and old lumber towns, over mountain passes, through rainforest and on to 22 miles of deserted beaches, many of them within Pacific Rim National Park Reserve. Tofino is at the northern tip of the park.

The wide beaches, whale- and bear-watching cruises, and hiking have long made Vancouver Island’s western coast a popular summer destination, but surfing didn’t catch on until the late 1980s in Tofino, a logging and fishing outpost.

In Tofino, where 15% of the population of 2,000 rides waves — my waiter at the waterfront 1909 Kitchen restaurant told me he has surfed in 52 countries — there are almost a dozen surf shops, including the all-female school Surf Sister, which stages the annual Queen of the Peak competition that celebrates the community’s female surf scene. 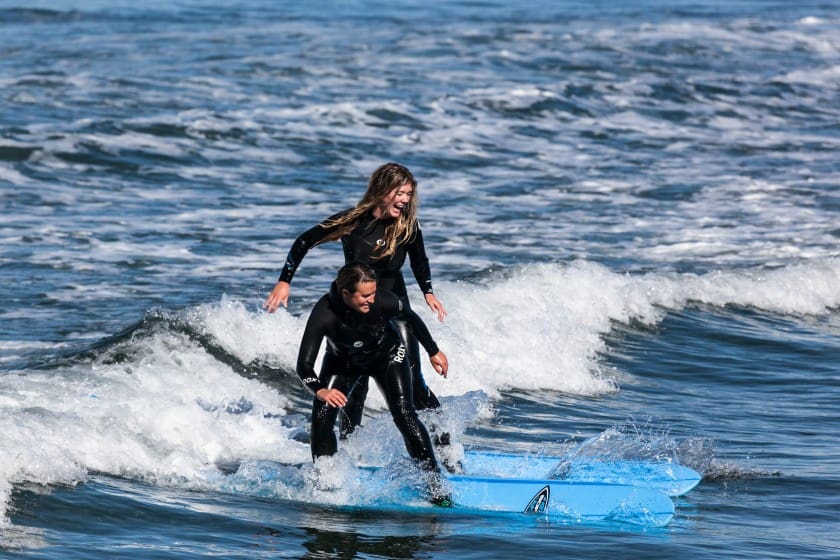 To fulfill my surf-ski dream, I first had to learn how to surf. Because I was there with my male partner, we signed up with Pacific Surf for its three-hour morning lesson. (The school has been rated No. 1 by Outside Magazine.)

The next morning, I found myself on Chesterman Beach wedged into a wetsuit with a board under my arm, questioning my decision to tackle a new sport at an age when I should know better. This despite knowing that the region’s shoreline and variety of swells make it an ideal place for beginners.

Adam, our hyper-enthusiastic instructor, would have no backing out. “Outside Magazine named Chesterman one of North America’s best beginner breaks,” he said. “You need to check it out, right?” Right.

Surfing in Tofino is a year-round sport. The surf is higher in winter with more storms, suitable for advanced wave riders, but even in winter there are mellow spots. Average air temperatures in February hover around 35 to 47 degrees, but on that morning, it was slightly below freezing.

Though getting into a wetsuit warmed me up, the five of us — all first-timers from across North America — were grateful we started with squats and simulating riding “waves” on the wide beach, flexing our gluts and hamstrings.

Toasty warm, we waddled into the water, a cool 48 degrees. I was barely hip deep when Adam shouted. “OK, go!” Fueled by adrenaline, I flopped onto my board and paddled like crazy. For a moment I felt nothing but my racing heart. Then the incoming wave caught me and I started to float toward shore.

It was such a blissful feeling that I whooped with joy and lay flat, enjoying the ride. It was like the first time I flew on skis through powder snow or surfed on a river wave in a whitewater kayak. I fell deeply and completely in love with the sport.

I improved more quickly than I thought I would during the next two hours. By my 12th ride, I was able to stand up — briefly — on the board.

Exhausted and hungry, I booked boards for our next day’s surf and ski challenge and headed for lunch at the Wolf in the Fog, known for its fresh, locally caught and foraged ingredients. Its dining room features contemporary sculptures made from driftwood and chunks of old surfboards.

After an afternoon whale-watching cruise, we dined at the popular Shelter Restaurant, where I met three members of the national surf team as well as Dom Domic, godfather of Canadian surfing.

He came to Tofino in the ’80s and is now president of Surf Canada, the national sport federation putting together the first Canadian Olympic surf team. “It’s been a decades-long roller-coaster ride getting surfing into the Olympics,” he told me, “so we will be the shiny new toy in the Olympic box at the 2020 Summer Games in Tokyo.”

It was encouraging to hear that some of those Olympic hopefuls were Tofitians who had started on the same waves I had wobbled atop that morning.

To start my dream day the next morning, we hit the waves early, this time on spectacular Long Beach. After playing in the waves for 2½ hours, I was thrilled to get the hang of being vertical on a surf board. We showered at the Long Beach Lodge Resort Surf Club, then turned our car eastward toward the glacier-laced skyline of the Vancouver Island Ranges.

Just after noon we were sipping Cumberland Brewing Co.’s Forest Fog ale and enjoying a slice from Riders Pizza in Cumberland (population 3,800), a young and active community of mountain bikers and backcountry skiers and boarders.

From Cumberland, it was a 30-minute zigzag up the ever-snowier road to Mt. Washington Alpine Resort, with spectacular views across to mainland British Columbia’s snow-capped Coast Range.

The ski resort is a family-oriented hill popular with locals; guests from outside Vancouver Island are rare. 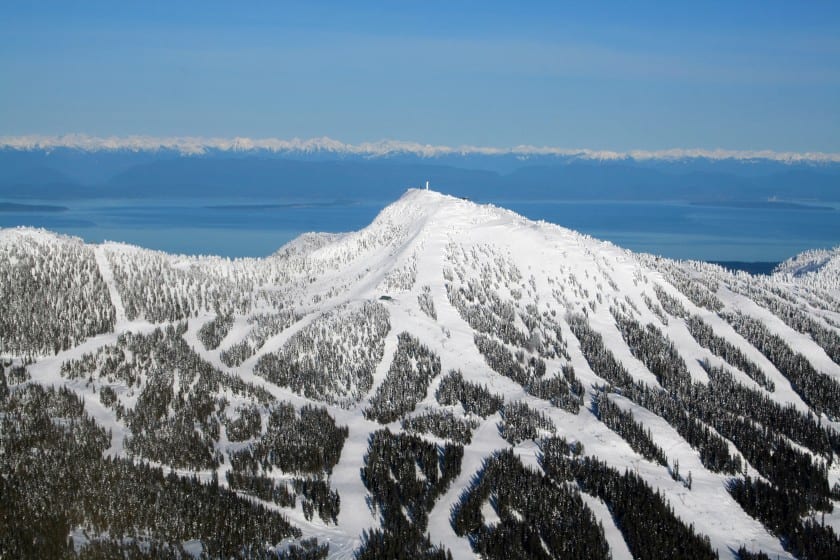 By 2 p.m. I had clicked into my skis and was basking in sunshine as I made downhill runs on 7 inches of fluffy champagne powder.

Mt. Washington and its 5,200-foot summit receives some of North America’s biggest snowfall, an annual average of 35 feet across 1,700 acres on 1,650 vertical feet of alpine terrain.

Just as Tofino catches the waves rolling in from Japan, Mt. Washington catches the Pacific Ocean’s moisture as snow. Sometimes, the mountain receives so much — in January 2018 more than 3 feet fell in 24 hours — that plows can’t clear the road fast enough and the mountain briefly shuts down.

Besides downhill skiing, there are 34 miles of cross-country trails and 15 miles of snowshoeing trails through forest, centered on a lovely timber-frame Nordic lodge with a fireplace and views. There also is a tube park and fat-bike trails.

The late-winter days of February and March are longer, which gave me more time to surf in the morning and then hit the slopes in the afternoon. And because it was Friday, I stayed to night ski, offered Thursdays-Sundays.

After all, it’s not every day or every place where you can watch the sun rise from a surfboard, then see it set while on skis atop a mountain.