Home News + Blogs Tofino and Ucluelet are back in Business 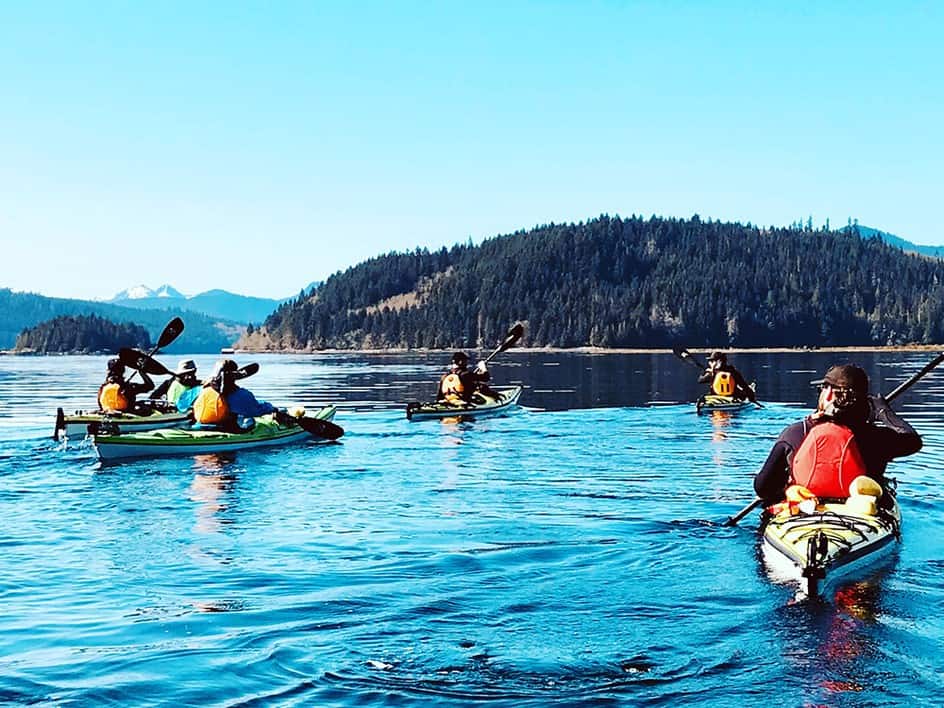 If the number of surfers we spot from Chesterman Beach is any indicator, Canadians know that Tofino is open for tourism. In fact, this fall is a perfect time for British Columbians to visit “Tuff City” and its even tougher cousin, Ucluelet.

The drive from Victoria alone seems epic after staying put for several months. I appreciate the scenery and stretch the journey to six hours with a few pit stops (unfortunately Cathedral Grove was closed) before that familiar whiff of ocean breezes and glimpses of sparkling waves hit us as we pass the Tofino-Ucluelet junction.

A few steps from our private patio at Long Beach Lodge is openness and space and the sandy beach where my 13-year-old dog immediately unleashes her inner puppy. I soon follow her lead. There are almost as many dogs as there are surfers. Little kids balancing boogie boards on their heads walk through the shallow waves while parents farther out surf and grandparents watch from deck chairs, feet buried in the sand. 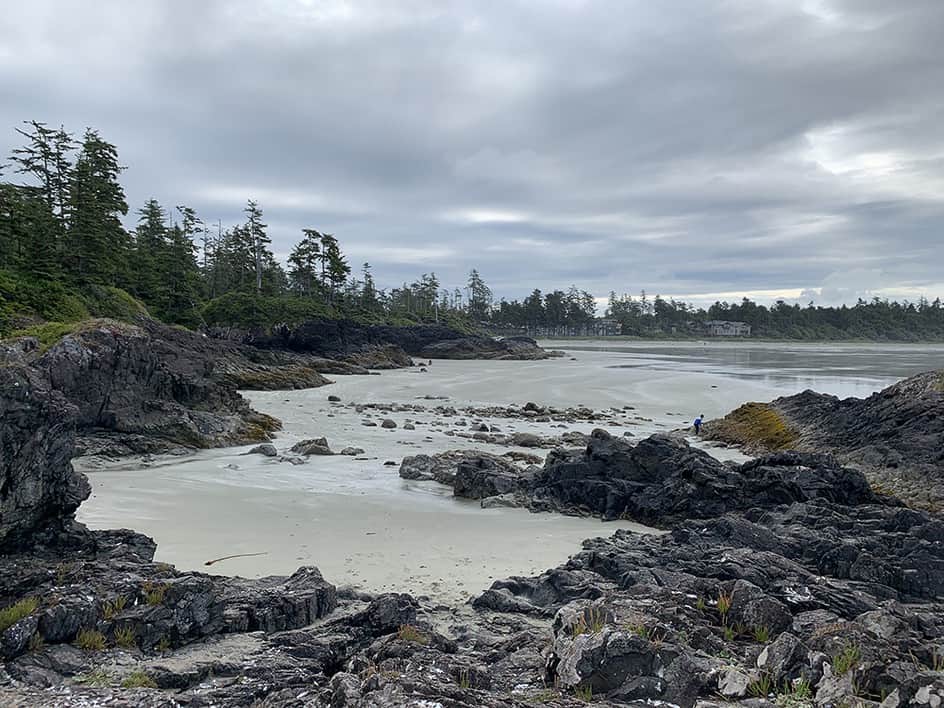 When the tide’s out at Cox Bay its a good time to explore. PHOTO BY JANE MUNDY

“We didn’t allow tourists back until June 1 and we’re pleasantly surprised, actually shocked, by how busy we became since shutting down mid-March,” says Duane Bell, a Tofino resident for 25 years and owner of Rhino Coffee House. “I wrongly guessed business would drop by one-third. By mid-June, we were just as busy as last June.”

We wait outside until a few people leave the café, get the signal to enter, order coffee and “bronuts” — egg, bacon and trimmings on a homemade savory donut — and can’t resist donuts with sprinkles for later. Everyone is respectful of lineups. “Social distancing makes us less efficient, but busy is a good problem, as long as everyone is patient,” says Bell. We eat breakfast at the public outdoor dining area.

Sipping “Bonnie Henry” cocktails, we watch a handful of surfers from our table in the Great Room at Long Beach Lodge, choose the “warm carrots” starter followed by halibut and duck breast and conclude that chef Shaun Snelling is brilliant. 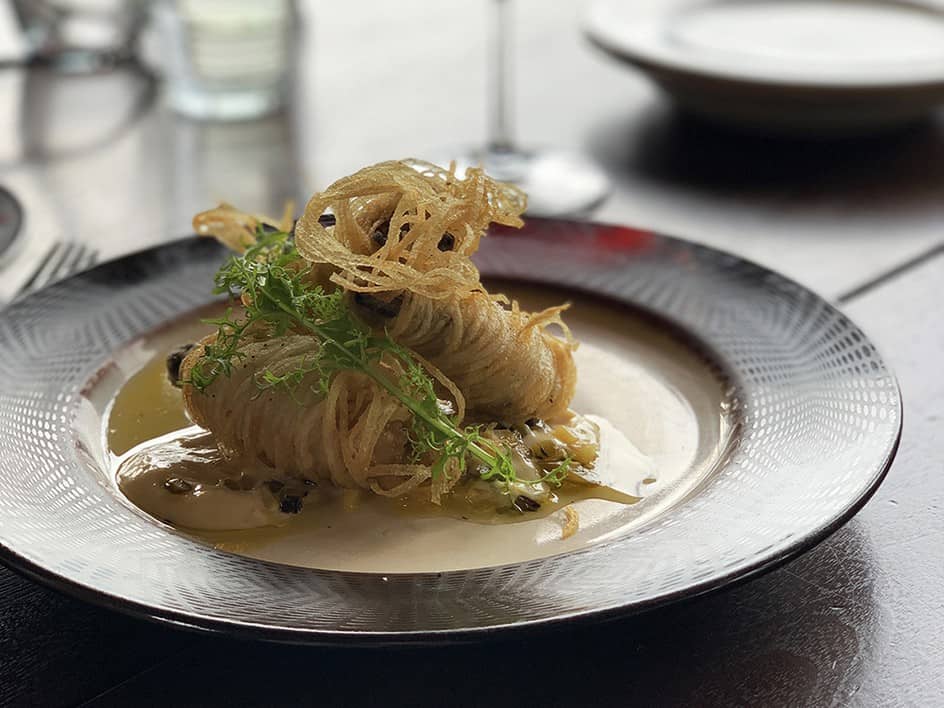 Potato-crusted oyster at Wolf in the Fog. PHOTO BY JANE MUNDY

Dinner next night at Wolf in the Fog is also exemplary: as soon as we polish off their famous potato-crusted oyster, perfectly paired with a Cedar Sour made with cedar-infused rye, we order another round. Cedar also makes an appearance in the roasted black cod — all is right with the world.

Ucluelet is no longer a blue-collar, rough-and-ready commercial fishing town. Dining and accommodations are on par with Tofino and as a bonus, it has the Wild Pacific Trail, open to hikers and easy to keep two metres apart with so many viewing areas along the forest path. The 2.5-kilometre Artist Loop is a pleasant stroll with plenty of photo ops such the lighthouse and the surf pounding on black rocks below.

After checking into The Cabins at Terrace Beach (self-contained with full kitchens, private entrances and comfy beds with gorgeous linens) we strolled the property to what seemed like our own private beach. Not another soul was in sight. 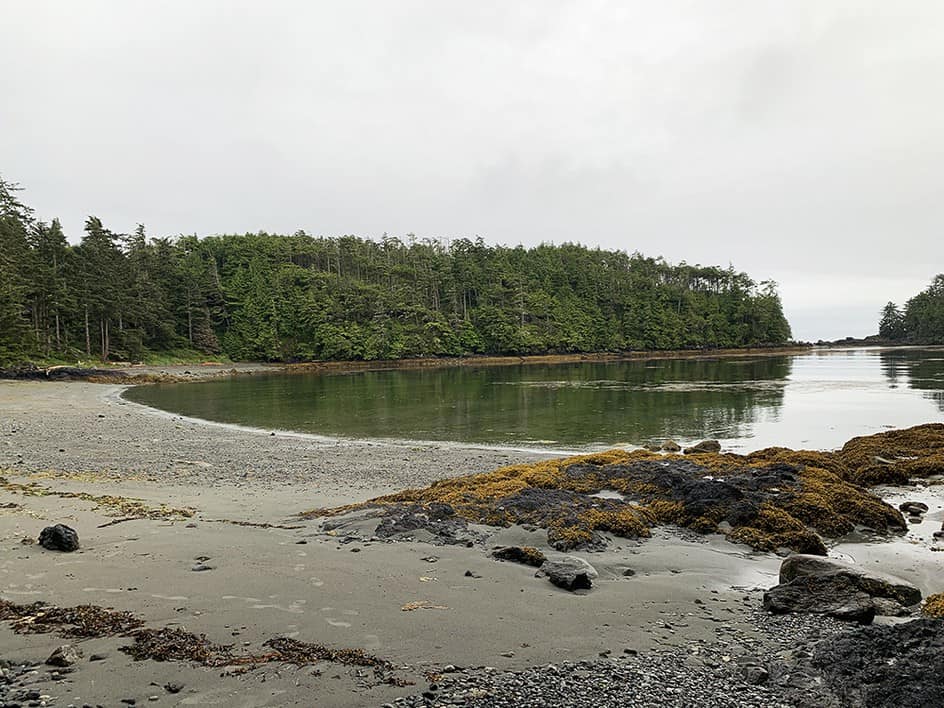 Black Rock Resort’s Currents restaurant is the place to enjoy sunset over the ocean and rocky headland. Located on an island joined by a causeway in the Ucluelet Harbour, Seom restaurant — the new kid in town — is serving modern Korean comfort food to a few well-distanced tables. For breakfast, brunch, lunch or dinner, go to Heartwood Kitchen. Chef and owner Ian Riddick invokes a sense of camaraderie, and “we are all in this together” seems to be the mantra here. I think it always has been.

“Most of our community feels comfortable with tourism and the level it’s at. The town is asking you to come here and respect the same things Dr. Bonnie Henry wants us to do,” Riddick says, as we devour buttermilk fried chicken and French toast. Roasted halibut with green pea risotto was on the minimal, “pandemic proof” dinner menu that night.

“We were overwhelmed going into Phase 3 because many of us believed we wouldn’t see nearly the number of tourists return to historical levels like last year,” he says. “I believe Ucluelet is a great autumn destination because of the vast amount of space we have. Our provincial and local parks remain spiritual places to retreat and disconnect, yet still pursue outdoor activities — they don’t change.”

And we do more than eat and drink. Hello Nature Adventures chose to stay open and diversify beyond harbour kayaking tours. They offer yoga kayaking and a bio-luminescence night tour. Chef Riddick provides charcuterie for day trips outside the harbour and they recently partnered with the local aquarium and the Ucluelet Brewing Company for a tour called “Beers and Biologists” — starting with a half-hour private tour in the aquarium (after closing time) with a biologist, followed by two hours of kayaking and a well-deserved beer. 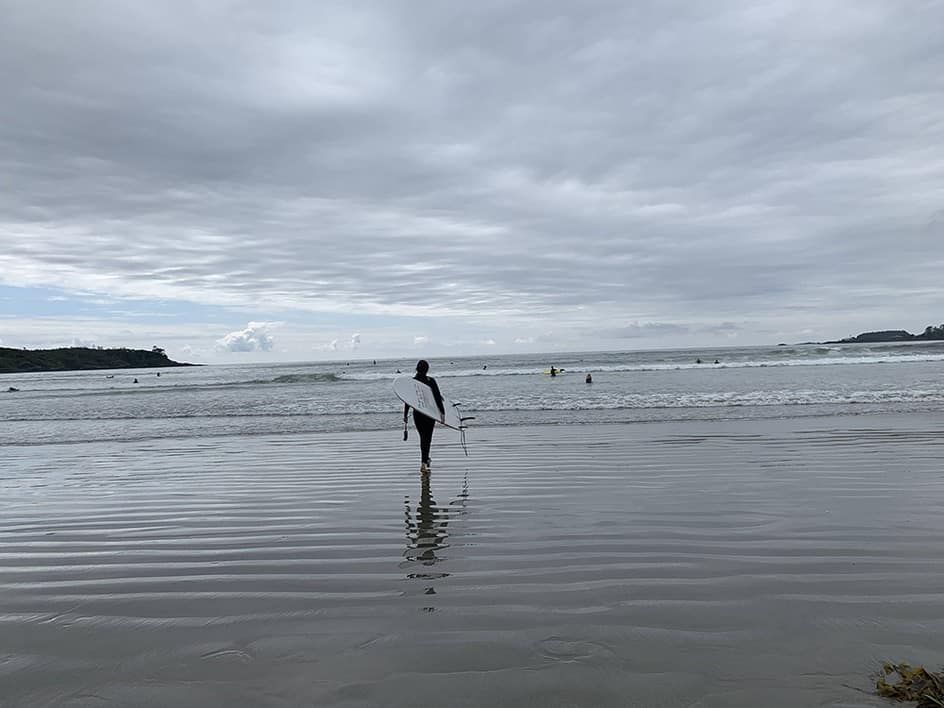 Surf’s up at Cox Bay. PHOTO BY JANE MUNDY

Speaking of brews, owner Dennis Morgan tells us over a flight of beers how the brewery opened in February in a renovated church. Talk about bad timing. “We shut down mid-March except for refilling growlers and going through buckets of sanitizer,” says Morgan. “Our takeout window is about one-third of our business.” A table is well worth waiting for.

Hello Nature Adventures has also partnered with First Nations. “With their permission, we can hike their old trading trail from one village to another and the famous blow hole is along the way,” says co-owner Kevin Bradshaw. “Last monthwe found a 15-meter male grey whale on the beach south of the trail. It will eventually get washed away in a storm but chances are it will be on the beach until the next big storm in October.”

Unlike restaurants and resorts, the kayaking business is running at about 20 per cent compared with this time last year. “We respect the decision of First Nations groups to close some territories, including the Broken Group and Clayoquot Sound, to protect their community. We look forward to returning multi-day trips once everyone is safe. And remember, if you don’t bring raingear, it will rain,” says Bradshaw, laughing.

Along with kayaking and hiking, cycling is big in Ukee, for newbies, families and serious cyclists. A bike path starts at the edge of townand follows the forest edge to the Pacific Rim Visitor Center at the Highway 4 Junction. If you want to visit “off-the-beaten-track” places, Pacific Rim Eco Tours provides fully guided electric bike tours that won’t leave your muscles aching the next day.

Riddick says off-season perks include more options for accommodation and getting into restaurants without a two-week reservation. “The ocean doesn’t care what you do — the temperature is relatively the same as summer and businesses have all their ducks in a row, with precautions in place and safety first.”